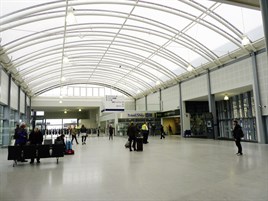 These are exciting times for Scotland’s railways. There is a lot of change on the way, with electrification, new trains and new franchises… as well as the highly significant and crucial independence referendum in September.

The Caledonian Sleeper franchise deal awarded to Serco in May (RAIL 750) promises 74 brand new carriages - the first locomotive-hauled coaches since the Mk 4s were delivered in 1989/1990.

Innovation comes in the form of en suite facilities, and the use of rebuilt GB Railfreight Class 73s to haul these new trains north of Scotland’s Central Belt.

The Sleeper deal was agreed with Transport Scotland (TS), the national transport agency. Its aim is to channel Government and public services to create a more successful Scotland, allowing the country to flourish. This is evident in the Sleeper deal, which places great store in using local suppliers - eventually 90% of all produce will be sourced from Scottish companies.

Rail is growing faster than any other mode of transport in Scotland, and TS says a key factor is the country’s cities. The biggest driver of growth is Glasgow (a 44.36% increase in passenger numbers between 2006-2013, compared with Edinburgh’s 12.63%).

And this dovetails with Transport Scotland’s plans for the ScotRail franchise, which involves vastly improving the current InterCity service between the likes of Inverness, Aberdeen, Dundee, Perth, Stirling and the Central Belt.

The aim is to create a major financial powerhouse, with Edinburgh and Glasgow working as one rather than competing. But to achieve this, connectivity to the rest of the country is vital, and the new franchise will reflect this.

The winner will be announced later this summer. TS is keeping quiet regarding the bids, which are being evaluated, but RAIL understands from sources that rebuilt High Speed Trains feature in the plans to improve services on key corridors between the Central Belt, Aberdeen and Inverness.

TS is pleased with the submissions, and calls them “ambitious”. It believes there is a real opportunity for improvement, and that passenger satisfaction, patronage improvements, modal shift and performance would all be key. For the ‘intercity experience’, TS says “comfort and times” are important.

Currently trains between the Central Belt and Aberdeen/Inverness are operated by Class 170 Turbostars, which could be internally cascaded.

Reliability of the current services is around 95% in terms of public performance measure, while the Moving Annual Average (MAA) is hovering around the 92% mark.

Although an agency of the Scottish Government, TS is not an overtly political organisation, but it notes that devolution has resulted in a marked increase in investment in the railways since 2006. While expenditure in rail infrastructure has dropped from £357.9 million in 2006/2007 to £283.2m in 2013/2014, over the same period expenditure in rail services has risen from £312.2m to £511.5m.

Benefits have been widespread, according to TS. It highlights several key schemes, including the opening of the Stirling-Alloa-Kincardine line in 2008, which introduced new passenger service opportunities, improved connectivity within the Central Belt, and improved freight services. By running along this line, freight was diverted away from key routes such as the Forth Bridge, allowing more passenger trains to run to key destinations such as on the Fife Circle.

Phase One of the Highland Main Line scheme delivered two additional services and a journey time saving of up to 18 minutes.

Of course, these plans were already in place before the cancellation of the Glasgow Airport Rail Link (GARL) scheme, but were pressed ahead with regardless.

TS highlights the opening last year of Conon Bridge station in the Highlands as a success, and is similarly proud of the redevelopment of Edinburgh Waverley station, which now has additional platforms and step-free access.

Looking ahead, the Edinburgh to Glasgow Improvement Programme (EGIP) offers the possibility that bay platforms on the west of Edinburgh Waverley (specifically Platforms 12 and 13) could be extended to cater for longer trains, while bay platforms at the east end may also be extended.

On Aberdeen to Inverness Phase One there will be double tracking and signalling improvements to reduce journey times, and enhanced commuter services. New stations will be built at Kintore and Dalcross, with plans to improve connectivity and journey opportunities.

Between Aberdeen and the Central Belt, investment will feature a new freight loop at Laurencekirk, and line speed and track improvements to enhance freight and intercity services.

On the Borders Line, which is due to open next year, there will be seven new stations, a 55-minute journey, and improved travel opportunities for the residents of the Borders region. Network Rail says that, potentially, there is nothing to stop the line being extended beyond Tweedbank.

Among all the projects underway in Scotland, EGIP remains the headline grabber. Even though the scheme has been scaled back, more than £700m is still being spent on the railway between Edinburgh and Glasgow.

Currently the scheme includes the redevelopment of Haymarket station, electrification of the core Edinburgh to Glasgow via Falkirk High route, the opening of Edinburgh Gateway station, running trains between the two cities at a fastest speed of 42 minutes, and redeveloping Glasgow Queen Street.

TS believes the latter will enable the station to fit in with its George Square surroundings, as it “currently stands out like a sore thumb”. All this will be carried out in Control Period 5 (CP5, April 1 2014-March 31 2019).

Other aspects of the scheme include electrification of Springburn-Cumbernauld and Cumbernauld-Coatbridge Central lines, over which are electric trains are now operating. This was completed in time for the Commonwealth Games that takes place in Glasgow in July and August.

Additionally, the line from Springburn to Cowlairs Junction has had overhead line electrification erected but not wired, also as part of EGIP.

Electrification is also planned for the Whifflet line during 2014 and the Shotts route by 2019. The former opens up a host of suburban rail opportunities, as almost all Glasgow suburban routes are now wired.

As is the case throughout the UK, fares are a key factor north of the border.

TS sets these, and has already taken action to address split ticketing fares anomalies. It says fares will be set within a regulated fares framework, at a maximum RPI for peak services and RPI-1% in the off-peak.

The new franchisee will be encouraged to look at a more innovative fares approach in the off-peak, with the aim of encouraging patronage growth. There will be a patronage metric to measure growth in off-peak usage. TS also wants a move to SMART ticketing.

Looking further forward, electrification will be a hot topic, with deliberations over whether more overhead wires will be strung up across the Scottish network.

TS says passenger numbers will rule out certain routes - Mallaig, for example, has no more than 100,000 passengers per year - but the decisions do not rely just on patronage. The implementation of ERTMS (European Rail Traffic Management Systems) and planned capital expenditure could also play a factor in what routes are electrified. Freight will also be important in any decisions, which suggests Aberdeen and the Highland Main Line could be wired.

High-speed lines are also a hot topic. TS believes high-speed rail presents a big growth opportunity for Scotland, and that the country cannot afford to be left behind. Analysis has been developed from across the nation, looking at the benefits of bringing HS to Scotland.

Transport Scotland is therefore working with the Department for Transport and High Speed 2 Ltd to take high-speed rail north of the border, with Secretary of State for Transport Patrick McLoughlin recently stating that three-hour journey times between the Central Belt and London is an aspiration. An interim report is due to be published later this summer, with a final report due at the end of the year.

But there is also talk of an Edinburgh-Glasgow HS route, creating a fifth link between the cities. TS believes it would help capacity, and create a strategic opportunity for even quicker journey times, perhaps as fast as 30 minutes.

TS points out that the fastest EGIP journey could be 37 minutes on the existing infrastructure, and this is with significant (as yet unfinanced) investment - a few hundred million extra would be needed to deliver that.

Analysis also shows that from the middle of the next decade the new electric trains running on the railway will already be full and overcrowded.

EGIP Phase 1 is scoped to provide an additional 30% capacity to today’s network. This is where the potential exists to turn the two cities into one economic powerhouse, TS believes.

Scotland is looking forward, with investment already made and more planned. It really is a new dawn north of the border.