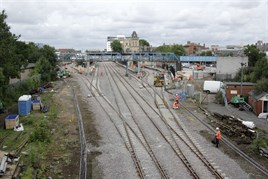 For an historic university city, Lincoln is surprisingly difficult to get to. Sidelined by rail operators and Network Rail alike, its lack of connectivity stimulates continuing debate in RAIL’s Open Access pages.

The city’s pre-privatisation direct services to Birmingham, Coventry, Crewe and Chester have all disappeared, and there are only two direct trains to London on weekdays. Refranchising has brought some changes, but Lincolnshire Railfuture Chairman David Harby believes Lincoln is treated as a “rural backwater”.

The East Coast Main Line, from which the Loncoln and Grimsby line branches off at Newark North Gate, offers some options. But the rigidity of the ECML’s clockface ‘Eureka’ timetable introduced in 2011 affords little room for flexibility.

Harby is aware of the constraints faced by operators seeking to better serve Lincoln. “It is easy to say Lincoln should have more direct services to London. However, even by railway standards this is a very complicated issue,” he says. “There is a path to King’s Cross available both directions every two hours that is currently used by the Newark North Gate shuttle - that could be extended to Lincoln.”

Proposals for direct Lincoln-King’s Cross trains were shelved by East Coast in 2009 owing to financial constraints, although Harby believes EC was reluctant to use the temperamental Class 180s. Looking dispassionately at the evidence, he says that dualling the A46 from Newark to Lincoln also almost certainly damaged the economic case for Lincoln services.

“Even from the outskirts of Lincoln, the overall journey time to King’s Cross is shorter by driving to Newark North Gate,” he says. “The current morning train to King’s Cross is used by a lot of commuters from Newark, and enables East Coast to avoid stopping a longer-distance train at Newark for these commuters.”

An East Midlands Trains four-car Meridian to St Pancras is also used by a lot of Newark commuters into Nottingham, alleviating what would otherwise be overcrowding on a two-car Class 156.

“Taking all this into account, a realistic request is for three trains per day in each direction,” suggests Harby. “Early morning for business travellers to London and tourists from London, and the reverse flows in the evening.”

A “virtuous circle” of more frequent London services would benefit both that market and the needs of business people, as well as being good for leisure visitors.

“Tourists don’t want to have to change trains,” says local Conservative MP Karl McCartney. However, he is realistic about the potential for growth, and is critical of his Labour predecessor Gillian Merron, “who before the 2010 General Election, proclaimed that we were getting ‘seven Up trains and seven Down trains a day’ - which, of course, never happened”.

It doesn’t necessarily follow that the market on a shorter run to Lincoln cannot be grown, but the Government doesn’t see it this way and is reluctant to allow open access operators to fill gaps in the market.

The business case could be bolstered by the presence of the University of Lincoln (the main campus opened in 1996), which in turn has brought more weekend travel by students. “Virgin Trains has shown what can be done with its Euston to Chester service, which is a similar distance ,” suggests McCartney.

There has also been a long-term deterioration in Sunday services. “EMT does seem keen to make changes, but it has been constrained by a lack of rolling stock and DfT micro-management,” claims Harby.

“While we will continue to operate our one daily service between Lincoln and London, we don’t have plans to extend this any further or introduce any additional services from Lincoln to London,” says spokesman Emma Knight.

“Our focus for Lincoln is really on improving services through to Nottingham, rather than London. We are working with local authorities and passenger representatives from across the route to try to identify ways in which this service can be improved through additional services and extra capacity.”

The EMT route to the capital via Nottingham is circuitous, and Knight points to East Coast as the main intercity service provider from Lincoln to London.

However, East Coast spokesman John Gelson says that with the current service “performing in line with expectations”, the operator has no plans to increase London services, and that for any future service enhancements, East Coast would have to “be convinced that there is a business case”.

Gelson hints to RAIL that the lack of plans for extra services to Lincoln is “a commercial issue rather than a pathing issue”, and possibly one for consideration by the next franchisee. A potential complication is Grand Central’s request to use some of the paths used by East Coast for the Newark North Gate shuttle - in the face of EC’s protests to the Office of Rail Regulation.

A better connection to London is not the only problem facing the city’s rail users. An hourly service exists to Doncaster, but “only if you want to go to Sheffield first”, according to Harby. He suggests it is “so poor that it is useless for most travellers”.

Lincoln to Peterborough is generally hourly, but those trains run only during the day. “When the upgrade is finished we will get faster services, but in addition we need evening and Sunday services,” says Harby.

And journey times to Nottingham are barely faster than the 1920s, when a fast service might have taken 51 minutes and a stopping service 73 minutes.

Today, the typical Lincoln to Nottingham journey time is 52 minutes for the fast services and 65 minutes for the all stations. A significant constraint here is the flat crossing over the ECML at Newark - replacing that with a flyover could ease pathing problems.

Lincoln to Sheffield, meanwhile, is also hourly “but again no better for speed with a typical journey time of 83 minutes for 51 miles”, according to Harby.

As with the Nottingham route, he believes this route needs infrastructure work to raise speed limits. A 60-minute journey time would then be possible, allowing stops at Saxilby, Gainsborough Lea Road, Retford and Worksop, with the potential for an hourly all-stopping service from Sheffield to Retford or Worksop.

Despite Harby’s enthusiasm, increases in rail services are unlikely to be universally popular.

Residents frequently vent their frustration in the local media about traffic delays at the Lincoln High Street and Brayford Wharf level crossings, caused by the amount of time the barriers are down.

The problems here are long-standing, dating back to the 1983 closure of the Lincoln avoiding line between Boultham Junction and Greetwell Junction, and the consequent 1985 demise of Lincoln St Mark’s station.

Further line closures in the following 15 years, justified by British Rail because infrastructure upgrades were deemed too expensive, resulted in all freight traffic being routed through the centre of Lincoln.

Early Network Rail figures suggest that by 2030, with all freight paths being used and all East Anglian ports running at maximum capacity, the barriers in Lincoln could potentially be down for 40 minutes in every hour. The resulting road traffic problems are likely to increase local discontent.

With the upgrade of the Great Northern/Great Eastern Joint Line in full swing (RAIL 699), Network Rail is taking the problems of misuse of the crossing extremely seriously, and has taken steps to improve safety.

NR closed its consultation into design options for High Street crossings in November. Having ruled out an underpass or a combined road and pedestrian bridge, it has appointed architects to develop the designs for two new footbridges that will reduce the risk of misuse, by separating pedestrians and rail traffic.

NR says the bridges will reduce pedestrian congestion and improve access to the city centre on foot. At least one area of conflict should at least partly disappear.

With freight increasing, and train operators making no promises about extra passenger services, Harby remains bemused by local attitudes to the railway.

“What confuses me is that many of those who are complaining about these extra freight trains are also campaigning for more direct Lincoln to King’s Cross services, which will have similar effects on the number of trains crossing Lincoln’s High Street. It seems that they think extra freight trains will damage the Lincoln economy. But extra passenger trains will benefit it.”