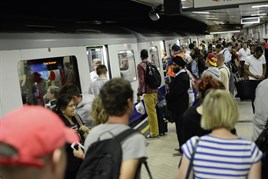 It’s been a year of celebrations for London Underground, which this year enjoyed its 150th anniversary. And now LU has another reason to celebrate, after claiming the prestigious Operator of the Year accolade at the 2013 National Rail Awards.

Organised by RAIL, the NRA celebrates the very best of Britain’s railways. This year, the top award goes to an operator that has achieved several record-breaking feats.

In the period covered by the judging, LU recorded its best ever service, with record levels of reliability despite having to meet the highest ever demand for trains. Customer satisfaction has also reached a new high.

At 1.21 billion journeys, LU recorded its highest ever number of passengers (up to four million passengers per day, and up 3.7 % on the previous year). Its trains covered 75.8 million train kilometres, up almost 5% on the year before. It recorded its lowest ever excess journey time (LU’s key measure for recording delays experienced by customers). And overall reliability has improved by 40% since 2007/2008.

The world’s first underground railway opened in 1863, and throughout 2013 events have been held to mark this achievement, all meticulously planned.

So long thought of as an archaic, creaking network of old, smelly trains and unreliable infrastructure, LU is changing those perceptions through a massive investment in trains and infrastructure.

There was also the small matter of the Olympic and Paralympic Games, which saw millions of people descend on the nation’s capital over a six-week period in the late summer of 2012. The Tube was instrumental in ensuring spectators got to the various venues around London.

All eyes were on London when the Olympics arrived. There were plenty of predictions that the capital’s transport system would create havoc through poor performance, but that did not prove to be the case. Indeed, its performance earned praise from Prime Minister David Cameron.

LU appreciated the need to ensure a reliable service, at a time when more passengers would be carried than ever before. Additional ‘peak periods’ would have to be factored in, because of the number of events being held across London throughout the day, and because of the late times that events finished at the Olympic Park in Stratford.

It was essential to optimise the number of services running, and LU engaged staff and passengers to ensure that it could manage the additional demand effectively, and make sure everything ran like clockwork.

LU Managing Director Mike Brown personally led 120 events to engage all 16,000 members of staff, in advance of what LU called “the biggest delivery challenge in our history”. Additional ‘Walk the Torch’ events were also held, to maintain focus and enthusiasm for the challenge facing LU through the period.

Anonymous comments included: “I just wanted to thank all of the staff at Stratford station last night, who were super efficient and cheerful despite the hour and number of people. They ensured we were out of the stadium from the closing ceremony and back at our car in Bond Street within 25 minutes - so organised, so in control, so made an excellent end to a memorable evening. All-round brilliant service from TfL throughout the games - thank you!”

One passenger told LU: “Just wanted to say the platform guard/announcer at Victoria in the mornings, who gives a run-down of the Olympic events each day and sends the drivers on their way with an ‘on your marks, get set, go’, is brilliant. He’s bringing a smile to lots of people’s faces in the mornings, including mine. Fantastic!”

Another read: “The station staff at Sudbury Hill really made those of us who worked throughout the Olympics feel a part of it - from the pictures of athletes decorating the station, the whiteboard with first the countdown to the flame arriving locally (with all the details), to the GB medal tally daily, and now starting the Paralympics countdown, they have brought a smile to my face every day. Well done them!”

Throughout the Games LU delivered more services for longer periods, to meet demand and to get spectators to and from events across the capital. It ran an hour later every day during the Games, and two hours later for the Opening Ceremony. There were also earlier starts on weekends, to ensure spectators could attend the first events of the day.

Additional peak services ran on the Jubilee, Central and District Lines, with bespoke timetables in place that best met the demand anticipated on a particular day.

A comprehensive communications programme was implemented that was designed to work closely with passengers in advance of and during the Games, to help manage demand at key times and to ensure people reached their destinations.

Over the six-week Games period, around 4,000 non-operational staff volunteered for 275,000 shifts as Travel Ambassadors, while 6.64 million train kilometres were additionally operated throughout the period - that equates to enough extra capacity for 14 million passenger journeys. LU carried a new record of 4.5 million passengers in one day.

But it was not just for the Olympics that LU deserves credit. With an infrastructure that largely dates from the Victorian period (it was the first Metro railway to be built), it has achieved, in the past year:

Highest ever number of passengers - on track to carry 1.215 billion journeys (around 80% of the rest of the entire national rail network).

Highest amount of service delivered, as measured by kilometres operated (forecast at 75.8 million km - almost 5% more than the year before).

Overall, reliability (as measured by lost customer hours) has improved by 40% since 2007/08, with a strong record of reducing delay over the past ten years (see graph). But LU says it will not stop there - it plans to deliver a further 30% improvement by 2015, using a range of innovative measures.

LU operates a complex network of 11 integrated Tube lines that connect with all other modes of transport in England’s capital. Some 530 trains operate in the peaks, serving 270 stations across London and beyond.

The plan is to upgrade the network to increase reliability and provide new services where possible. And this plan is already delivering significant results - evident from the amount of services LU has operated over the past 12 months, with improvements such as the Victoria and Jubilee Line upgrades.

The Jubilee Line now has a third more capacity, with every passenger journey two minutes shorter than before. On the Victoria Line, in the peaks LU can operate one of the highest frequencies in the world (33 trains per hour).

Weekend services on the Victoria Line have increased from 21 to 24 trains per hour, while passengers are benefiting from the new higher-capacity trains that were first introduced in 2009.

The new Victoria Line trains are also more accessible for disabled passengers, with wider doors and more spaces for wheelchair users, on-board audio and visual electronic information for hard of hearing and visually impaired passengers, and CCTV in every carriage. All new trains also include regenerative braking, so more energy is recycled.

As part of the continuous improvement plan, LU has introduced a new train fleet on the Metropolitan Line - the eight-car S-Stock trains built by Bombardier.

The new trains were the first ever air-conditioned and ‘walk through’ Tube trains, with enhanced accessibility including a lower train floor to give better platform to train access for customers with impaired mobility. They replaced trains dating from 1960/1962.

Similar S-Stock trains, known as ‘S7s’ because they are seven-car formations, are being introduced on the Hammersmith & City Line. Although shorter than their Metropolitan Line stablemates, the ‘S7s’ still have more vehicles than the trains they are replacing, giving passengers more room. Some platforms have also been extended in time for these trains to run.

After the judging period, but before RAIL’S National Rail Awards was held on September 19, LU was also able to introduce ‘S7s’ on both the Circle and District Lines.

LU continues to look for further ways to improve the customer experience. To this end it has worked with Virgin Media to introduce WiFi progressively at key stations. By April 2013, WiFi was available at 120 stations.

It also continues to enhance the travelling environment and make journeys more pleasant through an ongoing and popular art programme Art on the Underground, and through initiatives such as the ‘stations in bloom’ competition, which enhances the ambience at stations. The latter encourages staff to have pride in their station and network, with an annual competition to find the best ‘gardens’ created by staff in their own time.

In the year ahead, new trains will continue to be introduced on the Hammersmith & City, Circle and District Lines, while signalling upgrades for the Sub-Surface lines are due for completion in 2018.

Meanwhile, on the Northern Line, new signalling went live for the first time on part of the High Barnet branch, in advance of the completion of the line’s upgrade next year.

LU is also continuing to develop plans for the next phase of improvements, to ensure that the Piccadilly, Bakerloo, Central and Waterloo & City Lines - some of which currently use very old equipment - get their renewal as well.

LU says: “All our plans have our customers at their heart - be it increasing capacity, making journeys faster, upgrading technology, or finding innovative ways to make journeys more interesting and improving the environment.

“2012/13 has been a very significant year for us, with many successes and milestones reached - the highlights of which are the 2012 Games, Diamond Jubilee and our very special anniversary.

“But we remain totally focused on the task at hand - to continuously improve the services we provide our customers, and to evolve with their evolving needs.”

With that in mind, who is to say LU cannot defend its NRA crown in the future?