Plugging the skills gap for generations 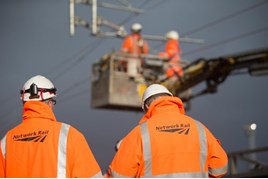 As Saleem Mohammad points out (pages 4-11) the lack of electrification schemes in recent years means that the UK is behind the curve - not only in the number of track miles that are electrified, but also having the right people with the right skill set in the field of rail engineering.

Following two years of research and development, the National Skills Academy for Railway Engineering (NSARE) was established in November 2010, when Vince Cable, the Secretary of State for Business, Innovation and Skills at the time, announced that the UK Government would support its business plan with a start-up grant of £2.7 million. The need for such an organisation is clear; the demand for railway engineering skills is growing (in terms of both quantity and quality) and there is competitive international demand for railway engineers - and professionals in particular. With further demand for engineers from other UK sectors such as telecoms, manufacturing, construction, power and nuclear competing with the rail industry, something needed to be done to attract engineers to its field.

While it has been announced that the High Speed Rail College will operate at two sites (Doncaster and York) all of the other industries have established skills academies and major initiatives to attract engineers of all levels. In response, the NSARE pan-industry Board of Directors, chaired by RSSB Chief Executive Chris Fenton, has set out to professionalise the workforce. It does not deliver training directly, but works with employers and stakeholders to understand their skills needs, and with training providers to ensure they are delivering the right courses.

The NSARE has set out to improve the quality of training provision on offer and manages a unified training accreditation scheme to ensure that each employee receives high-quality training in the competencies that the employers specify.

Research undertaken during the development and approval of the NSARE identified the following specific needs faced by the industry for the future:

Recruitment of school leavers for training as apprentices, as a first step on a career path to becoming professional railway engineers.

Recruitment, training and development of graduates to become qualified engineers.

Incentives for and training of experienced engineers without degrees to also become professionally accredited engineers.

Up-skilling of the engineering workforce to a minimum of Level 2 , including transient workers.

General up-skilling of the workforce in line with the technological and efficiency demands of the railway.

Training of the skilled workers of today to become the supervisors of tomorrow.

‘Conversion’ training of craftsmen and professionals from other sectors to become railway engineers.

Taking that into account, the role of the NSARE is to develop and implement a unified railway engineering skills strategy for the whole industry, ensuring that training capability and capacity meet the future needs of Britain’s railways. Its activities include forecasting skills requirements, the accreditation of training organisations, the standardisation of training course content, Business-to-Business services for employers and training companies, and promoting careers in the rail industry.

Elaine Clark, the head of NSARE’s Business Services, says that a potential skills shortage among the workforce needed to make electrification schemes happen was identified some years ago, with the report of a skills forecast published in 2013.

And while it’s not NSARE’s responsibility to recruit those people, from lower-skilled linesmen to higher-skilled electrical engineers, the organisation does have a role in working with employers to ensure that they have the people they need.

“There’s still some way to go,” says Clark. “We worked with the industry and employers and qualification awarding bodies.”

Clark says that some work has been done in encouraging people to change careers and attaining a nationally recognised certification.

“We also put in Level 2 and Level 3 apprenticeships – which cover basic linesmen to advanced technicians,” says Clark. Emphasis has been placed on getting new people into the industry - particularly young people. The expectation - or hope - is that they’ll stay in the industry, providing a ready stream of qualified and experienced people for ongoing electrification schemes across Britain. Clark claims that over 100 people have now gained Level 2 or Level 3 apprenticeships, meaning that progress has been made.

But Clark also recognises that there’s a problem: the industry is not taking a strategic enough view of the skills shortage (even though there is a widespread view that the industry recognises it).

“The only other strategic initiative I’m aware of is companies recruiting people from the armed forces for re-training,” says Clark.

“It’s not as co-ordinated as we would have liked. But the industry has responded in part. There are good individual initiatives, but there is scope to do more collaboratively.”