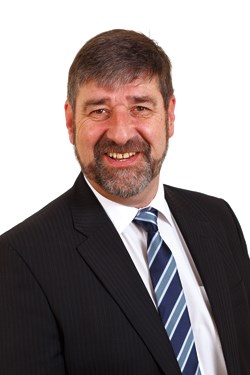 The Edinburgh to Glasgow Improvement Programme (EGIP) will enable electric trains to run between the two cities from 2016. The scheme delivers 150 single-track kilometres of new electrified railway, three redeveloped stations, one entirely new station, one new electric depot and platform extensions at four other stations. The electrics will also serve other destinations, such as Stirling, and despite the project being scaled back over the years, it is hoped that more locations will be electrified in the future. It is being funded by Transport Scotland, and delivered by Network Rail and its contractors.

SYSTRA Project Director Colin Preston explains the first phase of the scheme, with which his company is involved: “The plan is that driver training will start in September 2016, and a full service will be in place by December 2016 or January 2017.”

SYSTRA is only involved in the electrification work. Major rebuilding work is needed at Queen Street, with platform lengthening and an additional platform required. SYSTRA is working on the overhead line equipment design for this, but is not involved in the civil side of the project. Ultimately, all seven platforms at the station will be wired.

One particular issue is the station’s roof. Preston explains: “Under the barrel roof, the OLE must be supported with headspans which is at odds with the design range being used for the rest of the route. The roof has historic significance and is protected, so we can’t just hang equipment from it. Also, the works need to be carefully staged to allow the initial seven car platforms to eventually be extended to accommodate eight cars, which introduces complications with regards to anchoring the wires.

There is also the situation regarding the Buchanan Galleries extension above the station. This large shopping centre is being extended across the open space at the north end of the station. The station itself will be closed for 16 weeks, during which time all the work must be completed. Preston says: “We’re only involved with the design, so in advance of that we will need to have provided the plans for the portals and the wiring.”

The requirements, says Preston, are very specific. He told RAIL: “The design is co-ordinated with the platform extensions and track renewals. We are given data and information so we know where we can put the catenary. I refer to it as ‘the knitting’, because that’s what it looks like.”

The overhead line equipment (OLE) system being used by SYSTRA in its design will be installed in Phase 2. This is a newer, more reliable system than what was used in previous years. Preston explains: “There are various types of OLE in use throughout the UK, but these can be quite heavy and contain a large number of individual components. To try and simplify, and to bring the OLE in line with European standards, Network Rail has developed two new ranges. Series One is for over 100mph and Series Two for up to 100mph. Series Two is being installed on this project.”

Preston continues: “The structures are about the same distance apart. But Series Two wire tension is slightly higher than that of traditional OLE. This means that the pantographs perform more efficiently.”

SYSTRA employs some highly specialised and knowledgeable people. Preston claims that they have an in-depth knowledge of the limited book. And they know where to find things if they aren’t there: “My two lead engineers are guys who were involved with both Cumbernauld and Rutherglen electrification. They have very up-to-date experience of how to deal with Series Two, and how to make it work in the Scottish environment.”

From an outsider’s perspective, it would seem that Scottish electrification projects could start running relatively quickly, particularly in terms of the less visible groundwork elements. Preston thinks it will be the same with EGIP. He says: “There’s a lot of non-visible work going on just now. My understanding is that the Alliance, consisting of Network Rail, Costain and Morgan Sindall, will start erecting steelwork soon. And that’s when it starts to become visible. Until now work has focused on driving the foundations into the ground, which the public might not have seen.

“The appearance of new masts will create some interest. The installation of the wiring will certainly attract a lot of attention.” More visible parts of the OLE will be erected in the latter part of this year.

In terms of OLE design, Preston says: “It’s essentially just one design for the route. But there are some variations. There are reasonable tension lengths that are very straightforward. But with other shorter sections, which run from structure to structure, we are squeezing in the OLE within the boundaries of walls, in cuttings, on rock or near tunnels. Some sections pass next to a station or under a footbridge.”

Preston only joined the project in November 2014. He explains SYSTRA’s role: “The Alliance is Network Rail, Costain and Morgan Sindall. Below that there’s an unincorporated joint venture between Alstom, Babcock and Costain (ABC). Costain and SYSTRA are doing the majority of the project management for the OLE, and some of the OLE civil work. This is different from the Morgan Sindall part, which involves other civil work, such as platforms and bridges. Babcock is doing the railway part of the OLE. Costain is currently doing foundation work in conjunction with that project. Babcock has been using a piling train and now they’re starting to pour the concrete foundations. I think they’ve probably carried out about 800 foundations so far. We believe there will be around 2,600 foundations in total.” Steelwork on EGIP was due to start as RAIL went to press.

The arrival of the wiring train will signal the end of the first phase of SYSTRA’s involvement. But that will only arrive after the foundations and steelworks have been completed. SYSTRA will then focus on the remaining works and the ‘tail-end’ activities, checking that work completed is what was planned.

Preston points out some of the challenges on the route. Apart from Queen Street station itself, there is a steep gradient in a tunnel near the station. It’s a busy part of the network. Millions of passengers rely on the line every year. The route also carries freight and the line can carry traffic at up to 100mph. “It’s also a 150-year-old railway which bends and twists,” adds Preston. “Some of the bridges on the route simply weren’t designed with electric trains in mind! “There are historically important viaducts, and they must be treated sympathetically. We’ve got to figure out the best way of installing catenary along those, and we’ve carried out a lot of work on that.

“There are three tunnels, including the Queen Street tunnel and Winchburgh. In each of the tunnels we are just using conductor beam.” That, he says, is because it is easier to install and not so much room is needed. “And it’s a lot easier to maintain,” he adds. “There’s a lot of OLE ‘alchemy’ going on - we’re going to extremes in order to avoid issues. We’re doing this within the parameters of Series Two, which are quite tight. It is pushing us to think innovatively about the engineering solutions. In the main, it’s all relatively well processed, but there are many issues to overcome, especially when dealing with junctions, crossovers and tight spaces.”

Preston highlights that the line wasn’t designed to carry extra pieces of equipment: “We’re sometimes working up against perimeter walls. Working out how you put foundations in next to them - and then install the steelwork - requires clever engineering. Then we have lots of embankments and rock cuttings, which complicate matters further.”

There are, of course, other factors, such as possession limitations, which need to be considered. Preston says: “The Edinburgh to Glasgow line is the busiest line in Scotland. But there haven’t really been any huge maintenance renewals, because that would mean taking the primary services out of the front line, you don’t do that, you don’t get 54 blocks on the line. It’s an old railway and it has had a lot of service.”

But now the pressure is on. Preston says: “Our role comes early in the whole process. We do our stuff and then we’re out. The pressure is on the firms carrying out the construction. They’ve got to make an awful lot of pieces of this project work together. The stations, platforms, bridges, the electrification - all these pieces of the jigsaw have to fit together. We’re quite fortunate in that our piece of jigsaw is the first piece on the board, so everybody else has to fit round us.”

Preston summarises: “I was watching MasterChef last night, and one of the contestants had prepared a small dish that involved a very complicated recipe. It must have taken them about six hours to prepare. And it was just like what we’re talking about here. This is a very small piece of railway in the big railway picture. But there’s so much going on!”

Designs have been unveiled for an area in Warwickshire identified as a Heritage Hotspot that is due to receive two HS2 viaducts.

The Government is to back a rolling programme of electrification as part of efforts to decarbonise the railway, according to Transport Minister Baroness Vere.