Firms take stock of the market 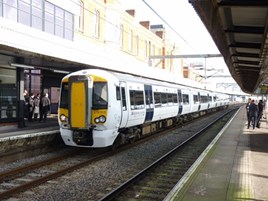 It is not just infrastructure firms that must know the inside track on electrification; train manufacturers need to know what is happening, too.

The current situation is tricky. There is widespread belief that the only market is in overhead line electrification (OLE), which surely means that there is only demand for electric multiple units (EMUs). But in February, the Rail Safety Standards Board (RSSB) Director of Innovation David Clark made the following point: “Only 60% of the network makes a business case for electrification. That means 40% needs an alternative.

“Sixty six per cent of DMUs are more than 20 years old. They need to be replaced or we need to think of something different.”

The situation gets more complicated: Network Rail is at something of a crossroads, and this interferes with OLE projects and, consequently, orders for trains.

Costs are being assessed, and a comprehensive spending review is to be carried out this summer. Nobody really knows what the results will be. And there is always the possibility that schemes could be scaled back, delayed or even axed.

Speaking at Railtex on May 13, Bombardier Head of Sales Rolling Stock UK Chris Parker said: “It is pleasing as a manufacturer to see the emphasis that the Department for Transport (DfT) has placed recently on new rolling stock, rather than cascades. The UK is an opportunity. We still monitor emerging technology, such as Independently Powered Electric Multiple Units (IPEMUs) but most new rolling stock is EMU. There are no plans for diesel multiple units, but you never know.” If there is a market, he reckons it would be for between 100 and 200 vehicles. But he compares that to the need for, potentially, thousands of new EMU vehicles.

To back this up, he highlights studies from the Long Term Passenger Rolling Stock Strategy for the Rail Industry, which talks of the need for thousands of new vehicles, nearly all of which would be electric.

Alstom Managing Director Urban & Services, Alstom Transport UK Piers Wood shares this opinion. Also speaking on May 13, he said: “We need to get back into the rolling stock market. It is like a clean slate for us. We have overcome past problems and we are now a very capable and reliable performer.

“The next thing is to win something, and the problem is that there is almost too much.” However, he warns, the Comprehensive Spending Review needs to be carefully monitored.

New manufacturers are preparing to enter the market. Hitachi started in 2007, when the first Class 395 Javelins arrived in the UK, and the firm has since won deals to supply AT200 EMUs to ScotRail, as well as the high-profile Intercity Express Programme (IEP) trains. That is set to be followed by the AT300 order for at least 29 trains for First Great Western (FGW), which will also be bi-mode trains. This means that OLE can be extended westwards, and trains capable of using it would already be in place.

But other manufacturers also have designs on the UK. Polish manufacturer Pesa (Pojazdy Szynowe Pesa Bydgoszcz) attended the Railtex exhibition on May 12-14 to showcase its products.

At the same event, Siemens launched its Desiro Verve, which is capable of speeds up to 125mph, and is very much aimed at the pending electrification of the Midland Main Line and trans-Pennine routes, as well as stock replacement orders for, perhaps, Abellio Greater Anglia and other deals in Scotland.

Then there is Construcciones y Auxiliar de Ferrocarriles (CAF), which is currently working with Serco to supply Mk 5 carriages for the Caledonian Sleeper franchise. It has developed trains it believes would be of interest to UK operators.

“The franchising process throws up all these questions every time. ‘Should we refurbish?’ ‘Can we re-traction?’ ‘As a movement of rolling stock from one franchise to the other, it’s about growing business, increased revenues, passenger numbers, do I need a new rolling stock for that?

“So every single time you get to this, and that’s pretty much the train operating company standard of 20 questions to ask somebody, and we need to respond to that market, the dynamics of that market.

“I think over the next ten years there’s every reason why suppliers will continue to operate in the UK. And again some of this takes you back to the franchising process, it creates different opportunities. There’ll be phases. And that’s because you can see that there’s a requirement for a large number of vehicles in a few years. So the UK market’s going to be quite a fruitful place.”

The Government is to back a rolling programme of electrification as part of efforts to decarbonise the railway, according to Transport Minister Baroness Vere.