Electrification apprentices: engineers for the future 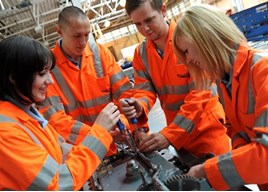 Network Rail’s award-winning engineering apprenticeship programme trains around 200 people a year in electrification, as well as track, signalling, telecommunications and plant – and has just marked its 10th anniversary.

The scheme for maintenance technicians, which has been running since 2005, combines technical training with personal development to produce the leaders of the future. It offers hundreds of young people the chance to learn and develop skills for a career that looks after three million people a day and is vital to the economy and prosperity of the United Kingdom.

Apprentices spend the first year of the course at HMS Sultan in Gosport – Europe’s largest engineering training facility. As well as learning and living alongside the Royal Navy, they get to share state-of-the-art recreation and sports facilities including a gym, swimming pool, squash courts, extensive playing fields, outdoor tennis courts, water sports and organised activities. From the very first day, there are also lots of team-building and social events.

In years two and three, apprentices get vital practical experience working out of their chosen depot across the country working with experienced teams helping run the network every day. They return to Gosport each term for further training.

Many girls believe engineering is a job for boys, according to a survey of 12 to 17-year-olds published by Network Rail (NR). Engineering is second only to the construction industry in struggling to overcome the gender divide, the survey found.

Some 39% of girls say certain jobs are more suited to boys. Of those, 40% cited engineering, with 58% naming building and construction. Finance was rated the third most ‘male’ job (29%).

The findings of the poll of 500 school-aged girls will underline concerns among employers that they are missing talent because of entrenched attitudes by both sexes. NR is placing itself at the forefront of efforts to attract more women employees, with chief executive Mark Carne pledging a “war on the macho culture of the rail industry”.

NR Director of Diversity and Inclusion Loraine Martins says: “It’s no secret that the engineering sector in particular is male dominated and trouble attracting talented women into its sector, and organisations like ours are making a concerted effort to change that.

“This research shows that even girls aged 12 are sensitive to stereotypes, and are ruling themselves out of particular jobs. We must put as much energy into tackling bias whilst girls are still in education as we do into overcoming gender bias issues in the workplace.”

Network Rail has a 14% female workforce and has pledged to increase this with a three-pronged approach to drive change within the organisation which includes:

This research explored the attitudes school-aged girls have about their career, and what influences them in their choice. It found that 65% of those surveyed already had a good idea of what sort of job they want to do, despite half of them being aged 13 or under. This suggests many have already ruled out of a career in engineering as they either think those kinds of roles are better suited to boys, or that they as a female ‘couldn’t do that sort of job’. More than half - 56% - also admitted if they knew more about a particular career path they’d be more inclined to pursue a job in that area. Parents and teachers were cited as having the biggest influence on school age girls’ career choices.

NR Interim Director of Safety, Technical and Engineering Jane Simpson has first-hand experience of gender bias which she also became aware of whilst she was still at school: “If my school career adviser had her way, I would have become a nursery nurse or teacher,” she says.  Instead Simpson joined the engineering industry as an apprentice aged 16 and now manages a 500+ strong team of mostly male engineers and technicians.

Simpson adds: “Now, I see myself as just another member of the team, but it wasn’t always that way. When I became the first female overhead line engineer on the railway in the 1990s, male colleagues were alarmed to say the least, and I experienced some really sexist attitudes. However, I’m really glad I went through it as I’m using that experience to help redesign our graduate recruitment strategy and replace unattractive images of men on track with messages and imagery that appeal to both sexes.”

In an additional commitment to encourage more women to consider and pursue a career in engineering, Network Rail has signed up to the Women in Science and Engineering (WISE) Ten Step Plan, and is supporting a number of university technical colleges across the country in attracting more women to engineering and technical degrees.

Loraine Martins concludes: “We know our industry is perceived as being pretty macho and that men have a better chance of succeeding than women. If this is the general consensus among adults, then it’s hardly surprising that these attitudes appear to have rubbed off on younger generations.

“We cannot afford to be complacent and must keep challenging ourselves, setting ambitious targets to increase the proportion of women in our workforce and working with more education institutions to tackle the problem sooner and with the urgency it deserves.”