ANALYSIS: Managing our earthworks - the task gets harder each year 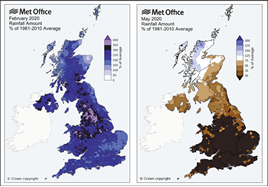 This year, Coronavirus has rightly held the attention of news cycles. But then, on August 13, a fatal derailment occurred near Stonehaven in Aberdeenshire, following very high rainfall and a spate of landslides.

Suddenly, the impact on our railway infrastructure of a rapidly changing climate and its effect on weather extremes became headline news.

These extremes are taking an increasing toll on all aspects of railway operation. But earthworks - hidden away out of sight in most cases and having had little attention since being cut or laid down over a century ago (some nearly two centuries ago) - are at particular risk of failure.

While we shouldn’t speculate over the details of the derailment, it is vital to understand the wider impacts of climate change on the resilience of our infrastructure.

February 2020 was the wettest February on record for the UK, and the fifth wettest calendar month since 1862 (it is worth noting that two of the other record-holding months were in 2009 and 2015). Storms Ciara, Dennis (apologies) and Jorge wreaked havoc across the country, with parts of the rail network severely affected by flooding and washouts.

Storm Ciara was Britain’s worst storm in seven years, with a combination of 100mph winds and intense rainfall resulting in widespread rail closures.

Soon after that, Wales was particularly badly hit by Storm Jorge. Lines in the Cardiff Valleys and Aberdare were partially closed, while the Conwy Valley Line - having only recently required significant repairs from previous flooding - was severed entirely (see feature, pages 58-61).

This was followed by the sunniest May on record for the UK, and the driest May on record for England. This may sound less impactful (other than for those of us on lockdown indoors with nowhere to enjoy the sun), but it actually represents another dangerous extreme that stretches the capability of our rail infrastructure.

While temperatures over this period have been warmer than usual, we haven’t seen exceptional extremes of temperatures across the country in the same way as we have for rainfall and sunshine - although heat in the Scottish Central Belt was enough to prompt cancellations in order to manage the effects of high rail temperatures (Analysis, RAIL 856).

Nevertheless, the first half of 2020 was characterised by weather extremes. And throughout this year, we’ve also had a string of earthworks failures (I work as part of a team who have had to design the remedy for several of them). 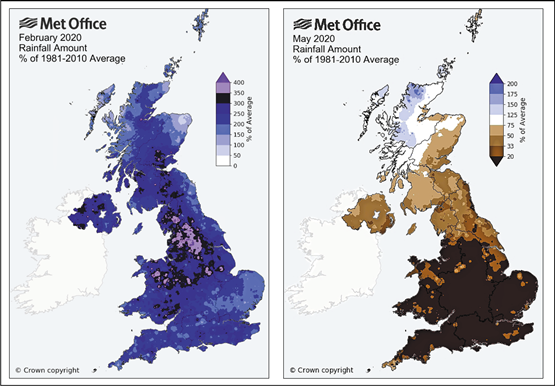 But to what extent is this year’s extreme weather related to climate change, as the planet warms?

To understand the current trajectory of global warming, there is no better visualisation than Ed Hawkins’ ‘warming stripes’, which show the rise of average global temperatures since 1850. At a climatic level, things are getting a lot warmer.

How does that manifest itself in terms of weather? Alex Priestley, a meteorologist and geophysicist, explains: “As global temperatures increase, the UK will see more weather extremes. Heatwaves and summer droughts are getting much more likely, as is heavy rainfall and high winds. This means more inland flooding. As sea levels rise, we’ll see more coastal flooding, too.”

This sounds like the perfect storm for stretching infrastructure to its limits, and earthworks are particularly vulnerable. But what precisely are earthworks? How do they work and how many are there on our railway?

The specifics of the difference between an ‘at-grade’ railway and one that is supported by an embankment or carried within a cutting depends on who is managing the asset. A common classification is where the railway is three metres above or below the normal ground level, although some bits of Network Rail widen this classification to two metres.

So, what of the earthwork itself?

At its simplest, soil consists of three components - solids (usually consisting of particles or grains of rock), water and air.

In our soil, this angle is the maximum stable slope angle. As you increase the percentage of a soil that is formed of water, you reduce the friction between the soil particles… too steep an angle or too much water in the soil, and our block falls off the table.

So, a soil’s water content - specifically, the pressure of water pushing the solid bits of a soil apart from each other (known as pore water pressure) - is directly tied to its strength. This means that healthy earthworks rely on functioning drainage.

You might wonder why motorways don’t suffer from the same challenges. Essentially, by the middle of the 20th century, civil engineering consultants and contractors had an immensely better understanding of geotechnical engineering than their predecessors. Look to older roads and you’ll see regular landslips, just as those on the railway.

Network Rail manages around 16,000 route kilometres (10,000 miles), of which 60% utilises earthworks - that’s around 10,000 kilometres of embankments and cuttings to keep intact. Lots of this was built with steep sides and (in the case of embankments) with poor quality fill consisting of whatever the railway company could cheaply get its hands on.

The Victorian approach to material procurement and construction gives us a range of serious geotechnical problems, most of them hidden (at least to the naked eye). These issues are compounded by more recent vegetation growth and the poor condition of (or lack of) suitable drainage.

On average, there are around 100 earthworks failures every year that have an impact on GB train services, although this average has fluctuated over the past few years to be as high as 140 per year. Ten years ago, this figure was only at 65 failures.

A substantially busier railway means that even if trains are only indirectly affected through delays, these quickly ripple around the network - causing major problems such as overcrowding and displaced staff. Even more critically, a greater number of services means an increased risk of a train being derailed by an earthworks failure - and the consequences of this can be severe, not least if more than one train is involved.

This is precisely what happened at Watford Tunnel in 2016, where a catastrophic head-on collision between trains with a closing speed of 150mph was only barely averted.