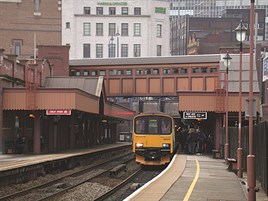 It has not been possible to travel direct between Banbury and Cheltenham over the old Banbury and Cheltenham Direct Railway since 1951. That was when dismal passenger receipts and rising costs at the intermediate stations led BR to close the northernmost section between Chipping Norton and the main line at Kings Sutton. A subsequent landslip sealed the line’s fate.

As in so many cases, the scrapping of a few miles of line destroyed a through route. What was left - a branch from Kingham to Chipping Norton and a straggling single track through rural Oxfordshire and Gloucestershire between Kingham and Cheltenham - lasted just 11 more years. Its closure preceded Beeching by months.

The choice of Banbury to Cheltenham as a roundabout railway journey is, perhaps, not being entirely fair to the modern railway, or indeed to the past. The Banbury and Cheltenham Direct was actually a straggling cross-country line cobbled together from various short sections built at different times during the 19th century. Though in the early 20th century it boasted a Newcastle-Swansea express, it was never a main line and its service was correspondingly slow. Indeed, it may well be that today’s Banbury-Cheltenham journey, involving a change of trains in Birmingham, is still faster than the steam-hauled ramble through Stow-on-the-Wold and Bourton-on-the Water.

It was these two Cotswold towns which lent importance to the ‘Direct’ line, however, as both are immensely popular tourist towns.

However, unlike their Peak District equivalents Matlock and Buxton (RAIL 635), Stow and Bourton have no rail service at all.

A quick look at population provides the answer - Bourton may burst at the seams with summer tourists and day trippers but boasts a population of just 4,000, while Stow-on-the-Wold has just 2,794 residents (compare that with Buxton’s 26,959 and Matlock’s 10,689). Small wonder that the Cotswold towns have no railway, though if it still existed, the Direct line would have Banbury’s 41,802 at its eastern end and Cheltenham’s 110,000 at the other.

My trip will be from Banbury into Birmingham Moor Street, on foot across town to New Street, and thence to Cheltenham. The route will, on the latter part of the journey, take me parallel to another closed railway, by which one could once have made the same journey.

However useful the line might be in relieving traffic congestion in the crowded Cotswolds, it is too far gone to resurrect. Virtually all the intermediate stations have disappeared, as have bridges including the substantial Hook Norton viaduct. Only Stow survives as a private house, while the trackbed is built over in several places, notably with a housing estate at Bloxham and an industrial estate at Bourton-on-the-Water. So thorough has been its extinction that only one original building survives, the down platform waiting shelter at Kings Sutton. It was there that I began my day, before heading to Banbury.

Banbury and Leamington stations were both scheduled for major redevelopment by the GWR in the 1930s. But while Leamington was completed, Banbury had to wait until after the war for its makeover. As a result, the present station is significant in being an early post-war rebuild. It has stood the test of time well, a more modern glass booking hall having been added successfully to the brick and concrete structure which dates from the mid-1950s. It is served by Chiltern Trains, First Great Western and CrossCountry.

At 1000 the car park still has some spaces, and £3.50 to park for the day seems very reasonable. A Chiltern Class 168 provides the 1035 to Birmingham Snow Hill, first stop Leamington Spa. Here the 1930s station remains a fine example of GWR architecture of the period - simple, solid, with minimal decoration and polished solid timber doors. Its traditional steel-framed canopies are in stark contrast to Banbury’s modernistic concrete awnings.

It’s just a short hop to Warwick, where the much older GWR buildings have lost their canopies but otherwise have been neatly updated. Out of town, there’s a new station, Warwick Parkway, serving an extensive car park, to reduce road traffic in this ancient and much-visited town.

Hatton retains its triangular junction for the Stratford-upon-Avon line but the once substantial station now boasts only glass shelters.

Through rolling Warwickshire the line parallels the M40 motorway. At Dorridge the Great Western’s flat-topped early 20th century buildings have had to be protected by a new roof of modern design, but the footbridge is an original, and even retains its roof, a rarity among GWR lattice bridges these days.

Next, we glide past the all-new Widney Manor station, a complete replacement for the dilapidated station which, as kids, we always knew as WIDNEY MANO, because the ‘R’ had long-since fallen off the nameboard! The original island platform building at Solihull remains, but the down platform is disused and overgrown.

From here, what was once a broad four-track stretch into Birmingham has been reduced to just two. At Acocks Green, the GWR building is above us on a bridge, and then with the tracks of the North Warwicks line merging from the left, we pass the deserted Tyseley station, all pure GWR even down to the two-tone ‘stone’ coloured paintwork.

Alighting at Birmingham Moor Street I find this, too, restored to vintage GWR style. True, there are some tastefully incorporated modern parts, but it is well done and difficult to distinguish old from new. Sadly, the superbly restored terminal platforms (complete with a ‘stuffed’ GWR 2-8-0) have been completely fenced off with an 8ft high plywood screen so that they cannot be glimpsed from any direction. It seems strange and pointless, but probably has some tenuous link to health and safety and will hopefully disappear once the tracks in these platforms are reconnected to the rest of the network.

I’d been looking forward to seeing Birmingham’s revamped Bull Ring Centre, if only because the old version was such a ghastly sea of concrete. I’m sure the new-fangled ‘shopping experience’ is fine, but my walk to New Street was through the dingy subterranean passageways full of litter that I remembered of old. Still more curiously, the whole centre, old Moor Street and new Bull Ring, is presided over by what appears to be a giant one-eyed whale eating a worm! I’m told it’s a Selfridge’s store - give me the traditional Edwardian elegance of Oxford Street any day!

At New Street, nothing has changed. This ghastly ‘station in a sewer’ has long topped the Chris Leigh Britain’s Worst Stations list, and continues to do so.

The 1212 to Plymouth, first stop Cheltenham, is a CrossCountry Voyager. These trains are showing the strain of a hard life on overcrowded long distance services for which they are really quite unsuitable. Most of the seats are reserved, and I settle into a very confined corner seat, travelling backwards, which I never enjoy.

Departure is accompanied by the longest PA diatribe I’ve ever heard. Not that one can hear much of it, just the last words of each sentence. The gist is: “You’ve caught a busy and overcrowded train. The trolley is stuck in coach F, and if you’re wise, in future you’ll travel an hour earlier as that train is less busy.” Thankfully I’m not going all the way to Plymouth! (I was told afterwards that these long-distance services are supposed to be HSTs - I saw several Plymouth trains during the day, none was an HST.)

From New Street, the old Midland route is taken, passing the new University station and the second Longbridge. The original lay within the former Austin/BMC/Rover works down a short branch line towards Halesowen. A few collapsing tin sheds are all that remains of the works where a friend and I were once treated to a day on the works railway, even driving the big Bagnall 0-6-0ST Victor.

A sprint down the Lickey follows, with Bromsgrove passed at speed and then out into the Worcestershire countryside. There’s a small new halt at Ashchurch, replacing the expansive triangular junction station for the lines to Evesham and Tewkesbury, of which little is left.

At Cheltenham Spa it is a one mile walk along the cycle path to the town centre, the first evidence of which is a massive Waitrose which appears to stand on the site of Cheltenham St James, the GWR terminus. However, even before I reach that, and scarcely half a mile from Lansdown, I spot GWR spear fencing, the remnants of a row of Scots Pine trees, and a drive with a pair of handsome iron gates. All are clear clues to the site of a GWR station, and the distinctive arrangement of iron railings is soon identified as the site of the Great Western’s Malvern Road station.

The town’s Chamber of Commerce has floated the idea of rebuilding the Honeybourne line into town from the Glos-Warks Railway’s present limit at Cheltenham Racecourse station. There are suggestions, too, that renewal of the link between Honeybourne and Stratford-upon-Avon would be beneficial, in providing a direct route from the south and east of Birmingham to Cheltenham, avoiding the city centre.

This seems to be an instance where geography and Beeching have combined to leave us the one route to Cheltenham which serves no intermediate population after Bromsgrove, while Broadway, Bourton and Stow are now reliant on tourism by road.

Doubts cast over future of three franchises including Southeastern