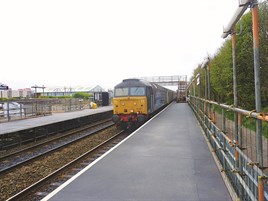 Previously, some trains on the route had been formed of single-car Class 153s - this quickly changed so that all trains were at least two-car formations.

Initially Northern used one of the five Class 142s made redundant by the closure of the Oldham Loop. This allowed a complicated cascade to be made which released a Class 156 for the coast. Another diesel multiple unit was required, ideally a Class 158 that could help in the Leeds area.

Instead, Northern got a Class 321 electric multiple unit! This meant another complicated cascade, resulting in another ‘156’ for the Coast. This allowed Class 153s to operate in pairs on services originally planned to use a ‘156’. Eventually a ‘158’ was hired from South West Trains, which allowed the ‘321’ to move elsewhere. The ‘158’ was due to return to SWT as RAIL went to press.

DRS also had to make changes to run the trains. The Mk 3s were moved from store at Crewe to Carlisle Kingmoor, where they were maintained and cleaned each night. This saw a cleaning company have its contract extended, and start cleaning rolling stock for the first time. Also, nuclear flask trains running along
the coast were re-timed to make way for
the shuttles.

But why did DRS run the passenger trains? McNicholas says: “Even though we are a freight company, we have had a passenger portfolio for quite a while, through the charters. We had the kit already, and thought it would be good to support Northern.”

McNicholas says the shuttles were DRS’ idea. “I told my directors to make ourselves known to Northern after the floods happened. I knew that shuttles were going to be the only way to move people.”

He says that moving the nuclear train from its timetabled path was not difficult - DRS has several paths along the coast, meaning it could be slotted into one of those. “As a local employer Sellafield was very supportive of the trains and what we were doing.”

He also recognised that the industry bent over backwards to help. “You needed flexibility and we got it. The DfT recognised what we were doing and helped.”

When the trains were running it was “all hands to the pump” says McNicholas.

“We have volunteers, and they trained as stewards for the trains. Some staff were also given short-term contracts, so in fact the floods enabled some people to get jobs! There was also a lad who wants to work on the railway who is heading to university next year. He is helping with the trains, which will look great on his CV.”

The trains are completely manned by DRS staff. The train is staffed with a driver, engineering support or additional driver (which allows the rear locomotive to still operate), guard and two stewards. The latter was reduced to one steward as DRS evaluated what exactly was needed. The trains are free to travel on, so the steward is there to help passengers with heavy luggage, pushchairs and shopping, as well as providing information.

The trains will finish on May 28. This is the third deadline given for the trains, after end-dates planned first for December and
then April.

Only recently the DfT gave £202,000 to allow the trains to continue running, but this time it looks like the end. When RAIL travelled on the shuttle, there was no more than ten passengers on the northbound service, and one on it when leaving Maryport. It is busier in peak-times, but with the funding tap switched off, the trains will stop. “It is a shame,” says a rueful McNicholas. “The infrastructure is there to support moving people to rail permanently.”

He says that there would be questions regarding where people would park. The current facilities are temporary, but could be made permanent, he believes. It is a model that could be replicated for possible workers trains to Sellafield (see panel).

Often the railway receives negative publicity, but the tale of how it rallied to help a stricken community is something to behold. What’s more, relationships have been built between two companies that could prove beneficial for passengers elsewhere in the country who at present are confronted by overcrowded trains. Workington has been a win-win situation for everyone.

Cumbrian coal mine to generate four trains per day

Up to four coal trains per day will run on the Cumbrian Coast Line from Whitehaven, once the town’s new Woodhouse Colliery opens