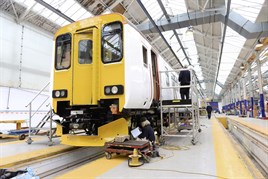 Once upon a time railway works were everywhere. When the railways were first built, individual companies each established individual works, and towns such as Crewe, Swindon and Wolverton grew up around these massive employment centres where the majority of the local population worked.

As the years went by the works closed, or were reduced in size. Yet even during the late BR days, several facilities survived.

However, when the railways were privatised many companies took their work in-house. New trains were built with maintenance contracts, and in the past decade even refurbishment work has been conducted at home depots, further reducing the need for trains to be sent to these works.

That has forced the closure of many of these historic sites. Swindon has shut completely. York closed, was re-opened by Thrall, and is now used by Network Rail. Doncaster is a shadow of its former self, but is still in use. And it’s the same story at Derby, which now houses a college on the site where hundreds of diesel locomotives were once built.

At Wolverton, close to the West Coast Main Line, a massive site has also reduced in size.

But it does have a bright future. Owned by Railcare, the workshops here were originally built for the London and Birmingham Railway Company in 1838, and Victorian era towns of Wolverton and New Bradwell were home to the thousands of workers employed at the new workshops.

Like most of the railway, Railcare is waiting to see what happens with franchising. Plenty of work could come its way, but it’s not known what that work will be.

Jamie Borgeat, commercial director at Railcare, explains: “There is a period of uncertainty. We are looking at work, and it could convert from a £5 million contract into a £30m contract.”

Much of this is because of the 2020 deadline for train fleets to be modified to meet the PRM-TSI (persons of reduced mobility) regulations. A C6X overhaul contract that is required on a fleet may not initially include the required modifications - such as new seats, grabrails and the fitting of a new disabled-friendly toilet - but that may be added at a later date.

Two recent contract wins, for the C6 (body and internal) work on 40 Class 365s used by First Capital Connect and on 119 Mk 3s used by Greater Anglia, stipulate that initial work does not include the PRM-TSI work, but it may do by the end of the contract.

This leaves Railcare, and other companies, unsure. But then train companies themselves are in a similar boat, because of franchise lengths putting a stranglehold on investment. The same also applies for rolling stock companies, although there is a general consensus that something will need to be done.

Railcare was the first to win a PRM-TSI deal, when it signed a contract with Porterbrook in 2011 to modify nine GA Class 156s. So far three have been modified.

“One thing that works in our favour is constraints on capacity,” says Borgeat. “We have learned to be flexible. We can look at what needs to be done, and plan. The situation for us is that the market is quiet, but the order book is strong.

“I have vehicles coming here for C6 and heavy overhauls. We have worked on how we engage and how we maintain vehicles. We are not into adding value where it is not needed - we provide exactly what the customer wants. We say the right specification.”

Borgeat elaborates: “You have to blend the work. C4 (wheels, brakes, bogies) and C6 is done. You do natural corrosion work, but anything else is over and above the design life. The ROSCO tells us we are doing the C6 work and then, depending upon the franchise, we may have to do CSO work.”

He highlights that discussions are underway for Class 319s and 455s to have new traction equipment fitted. The latter has seen a deal signed with Vossloh that involves 91 SWT units moving to Eastleigh, but plenty more deals are on the horizon.

For example, Heathrow Express Class 332s are currently visiting Railcare for a rebuild that will see impressive new interiors fitted. They now have what appears to be mood lighting!

“That was largely driven by BAA and HEx,” says Borgeat. “They knew they needed to change the trains. They won awards, and set a mantra that First Class should be a continuation of the flight. That was our brief.”

Other work taking place at Wolverton includes C6 overhauls on all the Class 153s owned by Porterbrook.

“All the rogue C6s for First Great Western, Northern and London Midland have been brought together,” says Borgeat.

The rebuilding of Class 156s for GA is being done here, as is C6 work and door modifications on London Midland’s Class 323 fleet. VTG also has a contract with Railcare for wagon spares, including wheels and bogies. Another deal that has recently started is one involving a C6 overhaul for the ‘365s’ (the first, 365519, arrived in February).

Starting in October, the Class 165/166 fleet used by Chiltern Railways and First Great Western will also visit Wolverton, for PRM-TSI work. The site is getting busier. “We have the resources, facilities and people to do more. We want to fill the site,” says Borgeat.

Sending trains to Wolverton puts them out of traffic, so surely that could affect passenger journeys?

“People do not maximise in the industry. Things may change,” says Borgeat. “A Class 365 could be used where a ‘321’ was - it doesn’t matter. They need tacit knowledge and projects.

“When a TOC goes to franchise, our spend is tiny, but there is a huge £2 billion bid. Of that, perhaps £20m is on fleet. But then things are needed and we go to a huge cost. We go, suddenly, from something negligible to something vital. And we get timescales. We play a big role in the industry. You need happy passengers - they are the customers. If they are not happy, then the TOC isn’t happy and the ROSCO isn’t happy.

“We need to re-affirm ourselves. You cannot buy £20m refurb jobs. There is an emerging market. We are very ambitious, privately owned, and a British company. We are British through and through, and want to deal with British railways.

Borgeat says that although the facility is fairly quiet, Railcare could make use of a redundant workshop if the order book was strong enough.

“It is about doing what people want us to do. If you have an order book then you reinvest. We could lay the site out correctly, as it is a bit awkward at the moment.

“There is a circle - we want to invest, so we need more work. We get more work, and we invest. I want engineers with specific capabilities. All too often at the end of a contract certain competencies leave. I want to keep them. We will increase apprenticeships, and the ambition here to do more is massive.”

Touring the site with Customer Relationship Manager Adrian Marshall gives RAIL an idea of its size… and an impression of how big it once was!

First port of call is the Incident Repair Facility. There is a pressed steel machine installed here that helps build metal for vehicles.

“We get everything - minor collisions to big ones such as the unit hit by the cement mixer,” says Marshall. That unit (RAIL 657) is still here as RAIL tours the site, or at least the remains are. One of the vehicles was completely destroyed, and its remains were scrapped at Wolverton at the beginning of the year.

Railcare won the contract to rebuild a redundant Class 210 coach that has been re-inserted into 455913 (RAIL 720). “Another vehicle was caved in, and we have rebuilt that,” says Marshall. That coach, Trailer Standard Open (TSO) 71726 has just been repainted.

Next is a paint facility. Today it is empty but a Heathrow Express vehicle stands nearby with staff applying transfers. “With those units the painting is minimal, but it takes four men a day to complete,” says Marshall.

In the East Repair Shed stand the remains of 365526, which was written off in the 2002 Potters Bar accident. They will be disposed of, but for now they stand forlornly in a dilapidated building that could (unlike the ‘365’) have a future.

A mock steam locomotive (built by volunteers) keeps the coaches company, while in the background one of two resident Class 08s is busy shunting in the yard. The other ‘08’ is employed shunting vehicles from the Royal Train, which is based here.

In the main repair shed is 156422, which is the second of the GA Class 156s to visit Wolverton. Not much is inside, although the new toilets have been fitted. Railcare strips the trains and fits refreshed interiors, grabrails and passenger information systems. Each one takes around two months.

In the Lifting Shop is 332006. Work on this is nearly finished, while outside another ‘332’ is undergoing tests before it re-enters traffic. Each unit takes 35 working days, and Railcare has been working on that reducing to 30. This project, like all the projects, has a dedicated team.

Beyond the lifting shop is the wheelset area. This is big business for Railcare, and one that keeps growing (after all, trains always need wheels).

The wheelset business looks at vehicles, service repairs and incident repairs. Cleaning and inspections are carried out, and decisions made on what work is required. Customers include Unipart, Alstom and Freightliner.

“This is constant,” says Marshall. “We only tap into a small part of the business. Unipart dominates it.”

As for bogie overhauls, Marshall says it is mainly freight vehicles that form the order book. “But it is growing,” he adds.

He shows RAIL a gearbox from a Pendolino, and highlights the fact that (unlike many other trains) they have hollow axles. “That design is more prevalent these days,” he says.

Railcare is growing as a business. It is at the forefront of the PRM-TSI work, and has made headlines by clinching several recent contract wins. The future, it appears, seems bright. Especially if the Department for Transport could decide on what it wants from train fleets…

In RAIL 723, Richard Clinnick visits Railcare’s other facility at Springburn.

FROM THE ARCHIVES: Eastern promise

After the East Anglia franchise award and order to replace the entire fleet, we examined what that means for the region