Stansted stock stands up to the test 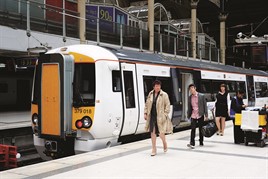 For so long now the West Anglia Main Line has been East Anglia’s poor relation – any new trains delivered to the region have instead gone to the Great Eastern Main Line and the London Tilbury and Southend routes.

Infrastructure has been unreliable… yet Network Rail has pumped millions into upgrading the GEML. Overcrowding has been a problem… but no new trains have been made available or cascaded.

Operators on the West Anglia have had to use Class 317s for the best part of 20 years, on services with frequent stops caused by the nature of the infrastructure on what is essentially a two-track railway. Meanwhile they have watched as Great Northern services from Cambridge enjoy non-stop trains to King’s Cross, taking about 45 minutes on a largely four-track railway, using 100mph stock that actually runs at that speed. The WAML, in comparison, is limited to 80mph.

But things are changing. A 2007 Government White Paper (RAIL 571) selected National Express for £185 million of investment, featuring new timetables, improved facilities, cascaded trains and (most eye-catching of all) new trains.

Thirty four-car trains were ordered from Bombardier, at a value of £155m. Owned by Lloyds, the new Class 379 Electrostars are electric multiple units and (crucially) were ordered to supplement, not replace, trains. This meant National Express East Anglia was gaining a significant amount of seats that it could use on its busy West Anglia line.

Originally the ‘379s’ were ordered for use on the Stansted Express route, before this was later extended to Cambridge and Kings Lynn. While the ‘Stansteds’ will be their ‘bread and butter’ work (with 18 sets required, working as nine pairs), a further nine sets will operate to Cambridge and Kings Lynn. This is significant, because the Stansted Express route represents 20% of NXEA’s total business,

Built at Bombardier’s Derby Litchurch Lane facility, the first Class 379, 379001, was unveiled to the press last October (RAIL 656) and delivered to NXEA for testing.

It has run over most of the operator’s electrified network, and has since returned to Derby for internal fitting following the end of its testing. Since then deliveries have been regular - so far 379001/003-029 have been released, with 379002 and 379030 still to come. All will be in traffic by August.

They started service in March, following a high-profile launch by Secretary of State for Transport Philip Hammond (RAIL 667). Initially two pairs were used each day, but at the start of the May timetable that increased to five. They work alongside the Class 317s that they will eventually replace.

Customer feedback, according to Capacity Enhancements and Programme Manager Keith Palmer, has been “excellent” and the staff “love them”.

He admits that there have been a few snags, although these are minor and have been ironed out. They mostly involved the on-board catering trollies, which were chipping chairs as they passed through some tight spaces on the train - this resulted in the trolley being kept in the same place (the seventh coach of eight) and passengers having to seek it out. The fitting of rubber ends to the corners fixed that problem.

“We have had some other issues. All new trains get them,” said Palmer, highlighting that getting the air conditioning right has been a problem, but one that is being addressed.

But what of the trains themselves?

RAIL travelled on two separate days - the first on June 1 with Palmer and NXEA Media Manager Peter Meades. We caught the 1055 London Liverpool Street-Stansted Airport and 1200 return, formed of 379023 and 379024, which were making their passenger debuts.

Initial impression was favourable, but a second trip (with photographer Paul Bigland) was needed. This was conducted on June 9. We caught the 1055 from Liverpool Street (formed of 379013 and 379005) and returned on the 1245 from Stansted Airport (formed of 379018 and 379010). As usual five pairs were in traffic, with four pairs of Class 317s plying their trade.

The trains are clean, although this is to be expected as not only are they new, NXEA has also employed cleaning staff to ensure its new assets remain cared for. This is essential to win new business, and to ensure that existing passengers continue travelling and feel rewarded by the new trains.

The cleanliness is helped by the sheer amount of bins provided. Two good-sized litter bins are provided in each doorway, while smaller bins are also located within the saloon.

When travelling on the first press trip, the ‘379s’ seemed a bit sterile, although Palmer believes this was down to the fact that the internal stickers had not been applied. Possibly so, because that sterile feeling was no longer apparent by RAIL’s second journey.

Starting with standard class on 379013, there is a good mixture of airline seating and seats with tables.

All airline seats have flip-down tables, although they do not extend for laptops as with other new trains and refurbishments. The flip-down table measures 10x121⁄2 inches. Legroom in these seats is 13 inches. All the seats are 18 inches wide and 16 inches long. They are 17 inches from the floor and cushion depth is 2 inches.

The seats are firm but not uncomfortable, and seem similar to those fitted to Siemens Desiro trains, rather than those usually fitted to Electrostars. One problem encountered on 379013 was that many of the flip-down tables did not remain upright when not in use, including in the priority seating areas. I wondered if this was a problem common to all Class 379s, but the other three we travelled on did not have this problem.

The fixed tables are 38x18 inches. All seating has sockets in standard - the plug, which can be used for laptops and mobile phones, can be found on the bodyside. This is a very good move, because a lot of passengers travelling on these trains will be business people who will need to charge their electrical equipment.

In the priority seating leg-room is 15 inches. Another good move for the business market is that standard class also has coat hooks fitted between windows - something normally reserved for first class passengers.

Luggage racks are provided both above the seats and at regular intervals through the train. Because they were designed for airport traffic, the ‘379s’ have plenty of luggage space, and this varies in size from racks capable of holding large suitcases to those in the disabled area capable of holding nothing more than a laptop bag.

One potential problem could be that with the shape of the roof, bags considered by airlines as hand luggage may not fit. Paul’s camera big didn’t, whereas my overnight bag did. However, this shouldn’t prove too much of a problem because of the amount of luggage racks provided for bigger cases.

The overhead luggage racks are fitted with LED lighting for passengers. This is activated with a switch, and will offer passengers improved lighting when attempting to read or check tickets.

The disabled-friendly vehicle on 379013 is 61913. It has fewer airline and table seats, but space instead for wheelchairs as well as the disabled toilet.

There are two ‘flip’ seats for passengers in this coach, as well as two wheelchair seats with flip-down tables that must be unlocked. Two additional normal seats are provided for helpers and carers.

On the toilet module itself there are two lights - these are for the open and close functions, although they are not marked. They light up as a passenger requires, so if the door is closed, the open button is lit.

The door itself is also very reactive. As soon as a blockage is detected (in this instance Paul) it senses this and stops trying to close. Whereas other trains have forceful doors that try to push passengers out of the way, these are the opposite - another welcome move.

Inside the disabled toilet are the nappy-changing facilities, but as with many new fleets these are basic, with just a flip-down table available. They do not have straps, nor is there any artwork to distract the children. This seems to be a missed opportunity.

One excellent feature of this toilet is that it has a physical lock. Once the door is closed, a switch inside the facility must be moved until a ‘click’ is heard, and the door is securely locked. This gives passengers more reassurance that the door is locked, and is very welcome. The sink is also much easier to use, with each offering of water, soap and the dryer only activated by pushing a button.

Departure is smooth, and the ride quality excellent. The Anglian infrastructure is not known for being the best, yet the ‘379s’ make excellent work of it. They are also nippy, with superb acceleration. There is soon the impression of speed, even though the ‘379s’ are currently limited to 80mph operation.

Inside the saloon, the trains are fitted with passenger information systems that display the destination and the stations at which the train will call. There are plenty of stickers around the train for safety, as well as instructions for the stowage racks, but not too many as to be overbearing.

Announcements are digital, but only near a station, and immediately after departure. It does not endlessly drone on with safety announcements or threats about wrong tickets, allowing passengers to enjoy the quiet surroundings.

Gangways between each vehicle are 28 inches wide, although that shrinks to 21 inches next to the disabled toilet. Within the gangway are handles, one on each side, that passengers can grab should the unit encounter rough riding. This is a welcome addition, and not something normally fitted to new trains.

A second toilet is installed in standard class, and this is in the 619xx vehicle. It is not fitted with the locking switch (as is the case with the disabled toilet) and is much smaller. When locked the door indicator simply shows red. It is basic, but that’s all that is needed.

CCTV is fitted to each carriage, with its location not immediately obvious. Lighting is provided via two strip lights in the roof, which makes it not as overbearing as other trains.

There is no specific area for cycles, surprising considering that the trains will serve Cambridge, where many people use their bikes. However, these trains were not originally due to serve the city, and a staff member onboard 379018 told RAIL that cyclists are able to use the space near the doors. And with the size of this area, cycles should not prove obtrusive.

Moving to first class, there is a door with reflective glass so that passengers cannot see into the area, which is fitted with 22 seats. This helps provide a nice ambience. Seating is 2+1, and all are at tables with the exception of two seats near the door.

WiFi is free in First Class and works brilliantly. It is quick and easy to use, and can be accessed (including registration) within seconds. Standard class passengers can also currently access it for free, although that is expected to change.

Reservations in first class use electronic indicators on the luggage rack. They are not yet in use, but will be from December.