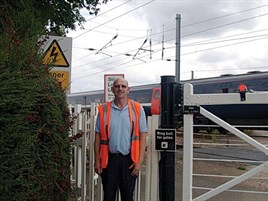 “Drive out of Peterborough to Marholm (pronounced ‘Marrum’) and down the ever narrowing lanes towards the East Coast Main Line, and you’ll come, eventually, to a level crossing called Woodcroft.

Apart from the overhead wires, you could be back in the 1950s. The crossing keeper’s cottage is still there but in private hands, the white swing gates with their red ‘targets’ stand sentinel across the narrow road, and a sign proclaims ‘ring bell to cross’. That’s where I work.

Woodcroft is thought to be unique, the only hand-operated, gated level crossing on a 125mph main line.

Its unusual layout ensured its survival. The road is too narrow for automatic half barriers and the railway, at five tracks, is too wide. Once it was two crossings: one over the two tracks of the Midland line from Peterborough to Stamford, and a second over the Great Northern lines. The ‘no man’s land’ between them would accommodate a couple of horses and carts, and it is said that if a road user upset either signalman he could sit in that no man’s land between the tracks for a very long time.

Today it is all one crossing, and the job of one person to let road traffic safely across this fast and busy main line. I’m one of a team of five, four men and one woman, who work Woodcroft crossing on a three-shift system. Only one person is on duty at a time and the crossing is manned 24 hours a day, seven days a week.

One week in five I have a GP (General Purpose) week. That’s when I do the gardening and odd jobs, if I’m not required for other duties. Woodcroft comes under the control of Helpston signalbox, a mile or so further down the line and just visible from Woodcroft.

I help look after the garden at Helpston, and I grow a few bits and pieces here. Well-tended gardens are a long tradition on the railway, but today’s busy system allows little time for such things.

When the bell rings and there’s a motorist on the far side of the gates, the first job is to let him know you’ve seen him.

“As soon as I can,” is my usual response.

I can spot when the barriers at Helpston are up or down, and that’s the first clue for a chance to cross. They are up and I can just see cars crossing the line.

“Woodcroft to Helpston.” (Radios are used to communicate between the two ‘boxes). “Can I have a release, please?”

“Sorry, two up,” comes the reply. Helpston barriers are down now and moments later an up NXEC express thunders past at 100mph. Another message to Helpston follows, but despite one train having passed, another has entered the section, coming from the south, and so there are still two to come.

Once they’ve gone, the release is given. On a bench in the ‘box is a small instrument, the size of a toaster. Two ‘L’-shaped keys stick out of the front. As soon as there’s a suitable gap between trains, Helpston releases the keys, a red light on the instrument lights and the keys can be removed. I go out, at the prescribed ‘brisk walk’, unlock and open the up side gate, then cross to the down side, unlock and open that, letting the car through, closing and locking it afterwards.

By the time I get back to the up gate, the car is through, the gate is closed and locked and the keys go back in the instrument. The light goes out and I radio Helpston, “Woodcroft to Helpston, clear.”

In a typical shift I’ll open the gates 20 or 25 times. Weekends are much busier. This road is on the Green Wheel (Peterborough’s network of cycle routes) and you can open the gates 50 times in a shift on a Sunday. Luckily there’s a few less trains.

Road users simply have to be patient. There’s no way to dodge round these gates, as has happened at the much busier Helpston crossing. Usually it’s a few minutes wait, sometimes longer. Twenty minutes is not uncommon, 45 minutes at worst, if something has gone wrong. Sat-navs cause problems because they sometimes send the unsuspecting this way when it’s the shortest route but not necessarily the quickest.

Occasionally an emergency vehicle comes this way. They have to wait, too. We’ve no way of stopping the trains.

Worst of the lot is strangers coming to the crematorium for funerals. Their sat-nav sends them this way and if they have to wait a long time they can miss the funeral.

You might expect a dyed-in-the-wool railwayman of long standing in this sort of post, but I’m not. I’ve been doing it for three and a half years after working in the building protective coatings industry.

I don’t enjoy fighting off the tiny thunder-flies from the adjacent farm fields, but apart from that it’s the best job I’ve ever had. Lovely! Wish I’d found it sooner!”