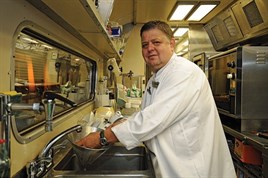 “I’m one of two chefs - the other is Mike Poole - and we work one week on, one week off. We don’t work weekends.

I live in Cardiff but the company lets a flat in Holyhead, which is where I stay during the week because this is where we end up when my shift finishes.

At 1500 on Sunday afternoon I travel to the flat at Holyhead, arriving at about 2030.

I’m up at 0400 the next day for the five-minute walk to Holyhead Train Station.

The first job is to light the grills and ovens, which are electric, and start preparing the breakfast menu. This involves grilling the bacon and cooking the sausages. We also offer Danish pastries, cereals, porridge and muesli.

It takes about 40 minutes to prepare breakfast in time fåor when the train pulls out at 0532 on its four-and-a-half-hour journey to Cardiff.

The kitchen equipment is no different to what people have at home. There’s a four-ring hob, three ovens and container supplying hot water, along with four fridges and a freezer.

The biggest problem is storage. There is not a lot of room as the kitchen only takes up half of one carriage.

We travel at speeds of up to 100mph, so you have to be aware of the fact you are in a moving kitchen and must be careful.

When we pull out of Cardiff the vegetables are cooked off and put into a chiller. The meats are cooked to order because of the lack of storage space.

Everything is served fresh, and apart from the vegetables nothing is pre-heated.

The dinner could be a hot or cold starter such as soup, prawn cocktail or apple and black pudding salad, followed by a meat dish, which could be chicken, lamb, pork or fish plus a vegetarian option.

Pudding could be ice cream, a cheese board or a crumble tarte tatan, while the vegetarian option might be stuffed peppers or an omelette.

I’m supported by two hosts (the staff who serve the passengers). One works in first class and the other runs the buffet section on standard class.

Nothing in the buffet is pre-packed and is all freshly prepared by the chefs.

It is a lot of work, but you get into your stride as long as you get your preparation done.

We let the hosts know what the menu is and tell them what customers who have pre-booked are having, so we can prioritise whom we feed first. If someone is getting off at Shrewsbury you need to feed them first, because they will only be on the train for two hours.

Mike and I will go shopping for the food, which is bought locally from various butchers and fishmongers, and is all Welsh produce.

We also have a free hand when it comes to the menu, and have an idea of who is getting on and off the train because we have a company BlackBerry which tells us what the bookings are.

The service began in December last year. I have been here from the start, while Mike started about four months ago after replacing another chef.

I believe the service was introduced to make the journey between the North and South better.

There is a feedback card on every table which goes to head office, and we are always kept informed of what people say.

We try to make it personal, and the chefs try to walk up and down the train to talk to the customers to find out if anything is wrong. You get to know people who regularly travel on the route, and try to cater for their personal taste.

The press have also been interested in what we do. The South Wales Echo did a feature on us in June, and the week before we were featured in the Daily Post in North Wales.

From Arriva’s point of view we are their flagship, and I believe we are the only train operator who serves cooked food to order. I feel proud to be one of only two chefs to be doing this job and the feedback has been fantastic.

I went for the job because there is no weekend work. Before this I worked as a head chef at Brains Brewery at the Fox and Hounds pub at Whitchurch in Cardiff.

The biggest thing about the job is the challenge. We could have 20 people walk on and not know what they want. Working on a train and seeing everyone get off happy means you have fulfilled your commitment to them.

Although we work an 80-hour week I do get nine days off, which is brilliant and makes it the best chef job I have ever had. I started when I was 15 and I’m 45 now.

It is hard work (the shift starts at 0430 and finishes at 2130), but Arriva is a good firm to work for, although I do look forward to going home and seeing my family on a Friday.

One of the best things about the job is the scenery. On a beautiful day I have the best view any chef could have.”

FROM THE ARCHIVES: Pacers: the unlikely local heroes...

GRAEME PICKERING looks at the past, present and future of these units, which have provided the backbone for many services over three decades

Welsh Government hopes to issue the ITSFT for Wales & Borders franchise before end of September.