Aerospace technology on the Tube 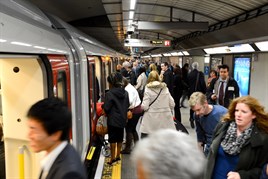 Doors are a perennial problem on trains. Most commuters have at some stage been faced with a Mk 3 coach door that doesn’t open, or electronic doors that take an age to illuminate when you’re desperate to get off the train. It can all lead to uncomfortable dwell-time delays at stations.

So London Underground decided it was about time someone thought up a new way to tackle this problem. And its work was impressive enough to win the Stephenson Award for Engineering Innovation at this year’s RAIL National Rail Awards.

The idea was part of an ‘Accelerating Innovation in Rail’ competition, which brings together like-minded rail innovators. An LU-led consortium including Atkins Aerospace, the National Composites Centre, Wabtec Rail and University College London received a grant to deliver an unusual project.

‘Introducing aerospace materials to rail’ was aimed at developing a commercially viable lightweight train door using cutting-edge composite materials and manufacturing processes. The idea was to take the first step into introducing lightweight trains using technology developed by the aerospace industry, where weight considerations are critical. Composites have long been used in aircraft.

The team created a specification which outlined the technical requirements for designing and manufacturing a lightweight door leaf to be fitted on a Central Line 92TS carriage, followed by an examination of alternatives to the present door designs, which are made of aluminium skins with an internal aluminium honeycomb structure.

Eventually, glass fibre-reinforced polyetherimide was chosen. But, although it was more suitable for high-volume production than the alternative choice (phenolic resin), as well as being tougher and more resilient to environmental and chemical attack, it had never been used on the railway previously. That meant its fire compliance against railway standards and regulation had to be proven. This was successful and allowed the project to continue.

Finite element analysis was then used to assess the structural performance, allowing the final design to be optimised by balancing the different panel thicknesses and strength requirements against the weight minimisation target.

The team paid considerable attention to manufacturing considerations - there would be no point coming up with a solution if it could not be easily made. A novel process was developed involving vacuum-forming the material with steel tools in a large autoclave.

And the finishing touch was a glass manufacturer developing special lightweight glass, to give a weight saving of more than 30% compared with conventional materials.

It all came together to create a total weight saving of 25%, which will help to cut door cycle and station dwell time.

These things are never easy to estimate without putting them into service, but the team worked out that a complete overhaul of the Central Line doors could produce journey-time savings worth £4.7 million per year, increase revenue, and reduce track wear and energy consumption.

Because of the lighter weight, larger doors could also be installed, speeding up boarding and alighting times. So far, the results and lessons learned during the research, design and manufacturing processes offer compelling insight into how future trains and components could be built, helping rail maintain and develop its environmental credentials even further.

This type of innovation has the potential to be used across the industry, and addresses all four of the ‘C’ targets in rail - capacity, carbon, cost and customer.