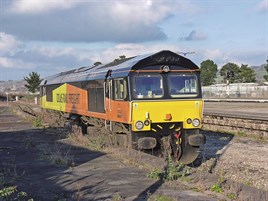 Meandering its way through the beautiful Devon countryside, Colas Rail 66847 is hauling a 15-wagon train. Each wagon can carry between 37 and 48 tonnes, and will soon be full of timber.

The train is weekly, and currently arrives empty on a Tuesday afternoon. A Class 66 has hauled it from Gloucester (where the wagons are stabled), and it is heading for Newton Abbot.

After running around its train, it then gingerly makes its way onto the re-opened single-track Heathfield branch, which curves to the left at the Devon junction station while the main line towards Exeter curves to the right. It will then travel four miles along the branch to Heathfield, at a maximum speed of 15mph.

At Heathfield the ‘66’ runs around its train again, before a short journey back to Teignbridge. There the train is loaded, ahead of its journey the next day to Chirk (north Wales). The timber has come from across the west of England, with lorries bringing it from Bodmin in Cornwall, north Devon, Dartmoor and Somerset.

While the train is being loaded, the ‘66’ will return light to Newton Abbot for stabling, and the driver lodges overnight in the town. Until recently, the locomotive would stable underneath a roadbridge that carries cars from Kingsteignton into the town, but Network Rail has re-opened Platform 9 to allow the ‘66’ to stable there.

This was one of the former through platforms that was closed during the 1985 rationalisation of the station and its tracks, and it has not been used for any purpose in ten years. In fact, the branch hasn’t been used in ten years either.

Andy Saunders, Colas Business Development Manager (Freight) - Freight Services, meets RAIL at Newton Abbot. He has a background in operations, and had worked for EWS before arriving at Colas.

It is Saunders who has driven this new operation. Working as part of a small freight team, he has been at the site several times to assess the best place to serve, look at how the train would run, and examine suitable loading locations. He says it is the little things that make the train work, and admits to spending a lot of time ensuring that every little detail is correct. It has to be, he says, otherwise simply the train will not work.

Saunders also believes in partnerships, and several companies and agencies are involved in this project.

A key partnership involves the level crossing at Teignbridge, where the train is loaded. Here there could have been a conflict - when it is being loaded the train needs to back over the crossing to enable Euroforest (which does that work) to put the logs onto the wagons, but this means that a busy peak-time road is blocked for periods.

However, Saunders explains that following discussions with Devon County Council, it was agreed that this work could be carried out off-peak, when the road is not used as much. On average the crossing gates, which are manually operated, are not closed for more than about eight minutes. There have been few complaints, and Saunders brushes off the fact that it could be a problem. “No, it’s fine now,” he says.

The trains form part of a three-year contract that keeps hundreds of lorries off Devon’s narrow, but busy, roads.

The deal is with Kronospan, which Colas serves elsewhere in the country at Chirk, Carlisle and Ribblehead. Kronospan is the UK’s biggest manufacturer of chipboard.

Once they are loaded the trains from Teignbridge run to Chirk via Bristol, the Severn Tunnel and Shrewsbury (where a second Colas driver takes over for the final leg of the journey).

When the trains were launched, Patrick Hallgate, route managing director Network Rail Western, said: “Britain relies on rail, and the value of rail freight is considerable. For businesses, rail freight can offer a cheaper, quicker and more practical alternative to moving goods by road. Almost £700 million of social and environment benefits each year can be attributed to freight traffic on Britain’s railways.

“Without the railway, the anticipated growth in freight traffic over the next 30 years would mean an extra 1.5 million lorry journeys on Britain’s roads each year.”

The first train ran on December 7, with 14 wagons carrying 600 tonnes of timber. But already they have increased in length - the train on which RAIL travelled had 15 wagons, including the newly introduced KSA wagons.

These KSA wagons are longer, with an extra bay on board capable of carrying timber. This allows the wagons to carry about 48 tonnes, according to Colas Rail’s John Ball (who carries out all the shunting, operates the level crossing, and ensures that the timber is strapped down).

The KFAs that were used previously, and which are still used for some of the wagons, are lower but cannot carry as much timber.

The previous week’s train (January 31) had 16 wagons, and posed operational problems at Newton Abbot because it was too long to fit within the two signals at the station where it runs around. To the disappointment of many, this meant that plans to use two Class 47/7s on the train had to be shelved, as they would have not fitted. Instead 66850 was used, making it the only train so far not hauled by 66847.

“The branch has not seen a train for many years, and needed to be capable of taking freight trains again,” says Simon Ball, Colas Rail Head of Freight.

“We arranged for it to be checked, cleared and then prepared for service with road access. The vegetation in the old goods yard was cut back and, after levelling, firm standing was created by rolling into the ground hundreds of tonnes of material.

“With this project we have demonstrated yet again that we are flexible and able to move quickly to create fully functional, fit-for-purpose freight terminals in a very short time.”

The infrastructure on the branch was found to be very good to begin with. It was relaid just before regular services finished, and the ride quality is smooth while the track does look in reasonable condition.

Saunders says that when the contract was first signed, he walked the route with some drivers to inspect the line, and found it to be in much better condition than first thought, considering it had been mothballed for a decade. The last regular trains along it served an oil terminal at Heathfield, while before that the clay driers there were also rail-served (see panel). It has been used sporadically to stable the royal train, while a Pacer Farewell charter ran there on November 27 2011.

The loading bay at Teignbridge, only a couple of miles from Newton Abbot, cost around £20,000 to develop. It features a portable cabin used by John Ball, and all timber is loaded here using lorries equipped with cranes. Any maintenance required on the wagons is also carried out here, by Davis at the trackside. This is possible because only Colas uses the line.

When the ‘66’ arrives at Newton Abbot, the driver will collect the token enabling his train to proceed onto the line, and which means no other train can run along it. He retains the token until the loaded train returns to Newton Abbot the following day. The line is, in effect, Colas’ for around 24 hours.

This is a story of a railway re-birth, and a ‘can-do’ attitude from a rail freight company prepared to ‘go the extra mile’.

"A failure to build the new line will lead to hundreds more heavy goods vehicles on to the M6 every day," - rail freight's plea to Boris Johnson