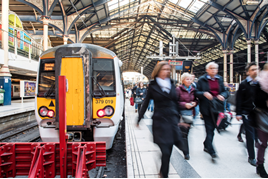 East Anglia may be perceived as a backwater, but there is no denying the huge challenges facing the region’s railways.

The new Greater Anglia franchise must deliver sufficient capacity - reliably - to cover a massive £3.7 billion premium payment that Abellio owes the Government over the next nine years.

GA must share tracks south of Shenfield with the £14.9bn Crossrail project, the first tangible signs of which are now in place with ongoing station refurbishments and the test running of the first Class 345 Aventra electric multiple unit.

Crossrail’s concession is let by Transport for London, which also lets the London Overground concession that runs not only into Stratford but also into Barking, as well as suburban routes on the West Anglia Main Line. It wants to run trains 24 hours and does not look too kindly on sharing the North London Line with freight trains.

Freight is also a massive issue for the region. The East Coast has several ports, the largest of which is Felixstowe. The Suffolk container terminal generates 34 trains per day in each direction, and having negotiated a largely single-track railway as far as Westerfield, trains must then either head south towards London or west to the Fens and through various capacity constraints, not least of which is Ely North Junction.

Such is the importance of the upgrade required for the latter, Rail Minister Paul Maynard told those present at the Rail Freight Group pre-Christmas lunch that he is constantly being asked about the project.

On the West Anglia Main Line, there is growing pressure to improve the main line south of Cambridge - journeys are much slower to London Liverpool Street than to London King’s Cross, and yet capacity is getting tighter. There is also a desire to press on with plans for Crossrail 2, although that is not likely to open until the 2030s, subject to approval.

Then there is the need to maintain traditional semaphore signalling on rural branches, to operate swing bridges that are a century old, and to run an increasingly busy network that is still at the mercy of level, foot and farm crossings that remain necessary for the communities through which the railway runs.

The man charged with pulling all the threads together is Richard Schofield. NR’s Anglia Route Managing Director is based at Stratford, above the Westfield shopping centre in the same building as GA. At the start of the new franchise, GA and NR announced that they would be operating an Accord to ensure the necessary work is completed in time for the new trains to be introduced, enabling faster journey times and for more people to be carried by rail.

NR has been subjected to some fierce criticism locally over the past few months, not least at a summit in Westminster in September last year, when Ipswich MP Ben Gummer launched a tirade (RAIL 810). He stated that while GA is spending £1.4bn on new trains and has a £3.7bn bill in premium payments to the Department for Transport, NR had yet to commit a penny to improvements.

The Great Eastern Main Line Taskforce, which campaigned successfully for improvements in the franchise, and of which Gummer is a member, was similarly firm in stating that now there is a commitment to the new trains, it expects NR to keep to its end of the bargain.

Schofield acknowledges the challenges. He says that NR is working with GA’s Deputy Managing Director, Franchise & Programmes, Mike Kean to ensure everything is ready for the major timetable changes in 2019, when the new trains enter traffic. This includes platform lengthening, ensuring the overhead lines can power the new trains, and that the new depot at Brantham (near Manningtree) is open in time for the new timetable.

“We have the plan - it will be ready,” he says. “We have weekly meetings with Jamie Burles , the Accord is laid out and it is how we measure success.”

For Schofield, what is success?

“Success is the December 2019 timetable working.”

So much for the future, what about the present? Currently the GEML is closed regularly for infrastructure work south of Colchester. More than once in 2016, when the GEML was shut the diversionary route via Cambridge was also closed, forcing passengers onto buses in both directions.

Schofield agrees this isn’t popular, but says: “In 2011-13 there were fewer closures. Part of that plan was an alliance decision to help it grow through fewer weekend closures, to give Anglia a clear run and grow the market. And it worked.”

The railway is currently closed on the slow lines (between Shenfield and Brentwood) until May, while NR prepares the route for Crossrail.

“We are now finishing Crossrail. We want to finish overhead line equipment replacement. There are renewals to carry out. The scale of the work we have seen will continue,” he says.

2019 may be big for the Anglia region, but it is also big for Network Rail as it marks the start of the next five-year spending period (Control Period 6, CP6). Negotiations are under way regarding the amount of funding for NR, and the Office of Rail and Road announced its initial findings on February 13. Schofield said prior to that announcement: “The scale in CP6 will change. The balance is always between what we want and what it needs to be. What we want is that capacity.”

Schofield notes that over the past decade Government has had priorities elsewhere on the railway, and thus very little investment was directed to East Anglia.

“We are seeing that change. We have kept things moving; we are doing the West Anglia Main Line work; we are electrifying the Gospel Oak-Barking route. We are working with stakeholders and LEPs, and with Abellio.”

The new franchise relies on capacity upgrades, but in East Anglia there are unique challenges, such as Trowse swing bridge. Just outside Norwich, the structure dates from electrification of the line in 1987 and is the world’s only electrified swing bridge. But it is a single-line structure, and so will require replacing, probably with a fixed structure.

However, Schofield points out that Norwich is still classified as a port, adding: “The minute you ‘fix’ the bridge, then it is not a port.”

Discussions are ongoing, but the consensus seems to be that for capacity concerns to be addressed, the bridge will need replacing. And then there is the need to actually construct and install a new structure, necessitating a closure. That would be disruptive, as inter-regional services to Cambridge and London would not be able to reach the city’s station.

Schofield suggests that any bridge would be erected next to the existing structure and slid in: “You can do clever stuff. There is land there to work on.”

Gypsy Lane level crossing, near Needham Market, also needs fixing. Several years ago an elderly person was killed here in an accident, and a speed restriction was installed and only recently lifted. Schofield reveals that after negotiations with Suffolk County Council, a solution has been found.