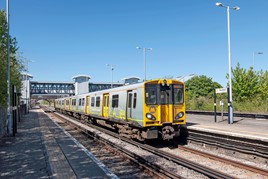 We are creatures of habit. None of us like to have our rail journeys affected by engineering works, but sometimes it’s simply not possible to avoid such disruptions.

Closing a heavily used section of railway for any period of time, to renew worn-out trackwork, is never going to be an easy project to manage. It takes a huge amount of planning, and regular communications with passengers to make sure the impact on their journeys is kept to a minimum.

How such a project is managed can make the difference between success and failure, and ensuring that significant periods of disruption do not cause any lasting damage to passenger confidence is essential.

This was exactly the scenario that faced Merseyrail in early 2017, when it needed to close the Wirral Loop section of its network in order to carry out essential track renewals in the tunnels that run beneath the River Mersey, and which had been in place since the line first opened in 1977.

The track renewal project lasted six months in total, between January and June 2017. But for the first six weeks it involved complete closure of the rail tunnel, which carries an average of 37,000 people each day. The impact of this closure therefore had to be carefully managed, to ensure that displaced passengers had a viable alternative form of transport to get across the Mersey.

And this significant project was managed so successfully, it triumphed in the Customer Service Excellence category at RAIL’s prestigious National Rail Awards in September, held at London’s Grosvenor House Hotel. The accolade was shared jointly by Merseyrail, Network Rail and Merseytravel, in recognition of how they had worked together to keep passengers moving during the closure.

There are just three ways of crossing the River Mersey - the Wirral Loop rail tunnel, the Mersey road tunnels, or the Mersey Ferry. With such limited transport options, the loss of any of these three crossings can have a huge impact on people needing to make the crossing between the Wirral and Liverpool.

The daily displacement of nearly 40,000 people from the trains would have a significant impact on the potential for congestion in the road tunnels, creating traffic gridlock on the road crossing (also heavily used). The risk of rail users simply transferring to cars could not be underestimated - had this happened, then it is possible that local transport could have ground to a halt.

Advance planning to manage the disruption was one of the key success stories of the project, with local MPs and user groups consulted about the plans in the months leading up to the start of the project.

Merseyrail was keen to ensure that as many users as possible were fully informed about the impact of the works, well in advance of them starting, and were then kept involved in the planning to be made aware of the impact it would have on their journeys. Users were also encouraged to offer suggestions and feedback, with some of these suggestions being adopted as part of the planning process.

Additionally, a huge publicity campaign was launched. The images used had a retro-feel to them in part, to highlight that the tracks being replaced had been laid 40 years earlier and were now in need of replacement. This retro imagery was used extensively, and its eye-catching appearance made it instantly recognisable to users.

As with many major engineering projects, rail replacement buses were drafted in from Arriva, to supplement the normal commercial bus and ferry services.

It was anticipated that the rail replacement buses would carry the majority of the displaced rail travellers. However, rather than just using a fleet of standard buses to replace the trains, the project specified high-quality buses equipped with WiFi and USB charging ports for passenger convenience, thus also ensuring that passengers had a positive experience of having to use the replacement buses. With many cyclists also using the Merseyrail network to access Liverpool and the Wirral, a specially configured bike-bus was also provided.

As the works began, additional customer service staff were brought in on the network to help passengers, alongside an increase in staffing on the social media teams. A dedicated track renewal section of the Merseyrail website was also created, informing passengers about the status of the alternative transport methods available.

With the works carried out in the height of winter, another successful initiative was the distribution of hand warmers, bacon sandwiches and sweets to passengers, creating much goodwill among the recipients.

A Transport Focus Transport Users Panel held in December 2016 had revealed that awareness of the works stood at 84% - an impressive result which showed that the pre-publicity had been successful.

And following the end of the six-week closure, a Merseytravel customer survey revealed that 80% of respondents agreed that the information provided had allowed them to make the correct journey choices, while 66% of users surveyed had altered their usual journey time in line with the advice offered during the planning stage to avoid creating too much congestion during the main peak travel hours.

The project had also involved full consultation with the local media, with no adverse publicity generated by the works - despite fears that newspaper headlines about the work could cause alarm, fears which thankfully proved to be unfounded.

During the works, customer complaints amounted to just 127 in total, which represented a tiny proportion of users over the six-week closure. And 83% of 6,490 tweets about the track renewals were either positive or neutral.

The key to the success of this project was the amount of planning and the involvement of as many interested parties as possible. This is what brought this entry to the top of the pile when the NRA judges were reaching their decision - they concluded that the Merseyrail track renewal project should be seen as a benchmark for others in the rail industry when planning major engineering works.

Between Merseyrail, Network Rail and Merseytravel, it has been proved that the impact of major engineering works can be managed well, that they do not have to create the negative headlines that are usually associated with such projects.