FROM THE ARCHIVES: On their way to Northern 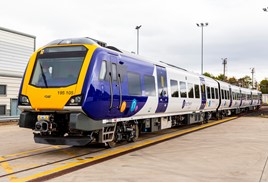 Almost two years after the current Northern franchise began, the first of the region’s new trains are about to arrive in the UK.

A glimpse of the future was available at Zaragoza in northern Spain on January 31, when the operator unveiled its first four-car Class 331 electric multiple unit.

The EMU is one of 98 trains being built by Spanish manufacturer CAF in a £490 million deal funded by Eversholt Rail.

It’s a significant step forward for Northern, and its desire to improve the service for passengers. Launched by former Managing Director Alex Hynes, the operator’s plan is to get passengers out of their cars and onto the railway. Hynes had previously spoken of his embarrassment in seeing passengers leave a Virgin Trains Pendolino at Manchester Piccadilly to finish their journey on a Pacer. That is set to end from December 2019.

Out in Spain, two fleets are being built across three CAF factories… Beasain, Irun and Zaragoza. As well as the 43 EMUs, CAF is also building 55 Class 195 diesel multiple units (DMUs) for Northern.

One of the principal reasons the deal went to the Spanish company was that it was able to build such trains - in the UK, DMUs were no longer being built because the market for them had become non-existent.

London Midland had taken delivery of 27 Class 172s in 2010-11, but after that leasing companies and manufacturers said no more would be built, believing that the market would be dominated by electrification and the need for more EMUs.

Fast forward to 2016, and the policy towards new trains had shifted to bi-modes, while politicians were openly voicing their dissatisfaction at the use of Pacers in the North.

The desire for the ‘Sparks Effect’ has been replaced by a need for wise expenditure. And while bi-modes are a favourite for many new orders, there are some routes (such as the Cumbrian Coast) where DMUs make sense.

Northern has not yet confirmed exactly where the new trains will run beyond Blackpool-Manchester Airport and Chester-Leeds, but has confirmed that the introduction of new DMUs will create an internal cascade. Thus, newer DMUs such as Class 158s will replace Pacers on routes such as via Barrow and Sellafield.

CAF Project Manager Eduardo Millan explains that all the bogies for both the Class 195 and ‘331’ fleets are manufactured in Besain, before being shipped to Irun (the ‘195s’) and Zaragoza (the ‘331s’).

All bodyshells are manufactured in Zaragoza. Those for the ‘195s’ are moved to Irun where the DMUs are then assembled, painted and tested, while the EMUs are completed at Zaragoza.

As of January 31, one complete Class 331 EMU was undergoing static testing at Zaragoza (and one ‘195’ DMU was at Irun). Seven ‘331’ vehicles were in the assembly line. A total of 21 bodyshells had been completed, and 19 had been painted.

Twenty-five DMU bodyshells had been completed, of which 20 are painted. Of those, nine are in the assembly line, with three of these undergoing static testing.

Millan explains that the UK approval system is “very complex”, and expresses his delight that SNC-Lavalin has been contracted to carry out this work.

“We must now deliver the train to Velim , and that will be an EMU. We also need to send a DMU to Romania and to Velim,” he says.

Romania is also home to a test track, which will enable the approval process to be completed more quickly. A Signal Protection Zone (SPZ) is planned for the ‘331s’ in the UK, with sites at St Helens and between Stoke and Macclesfield being considered.

Ian Hyde is Northern’s Head of New Trains, with responsibility for delivering these new fleets. He lists the benefits of the new trains, including 1/3 and 2/3 doors that allow better passenger movement within the carriage. They are also fitted with large vestibules designed to improve passenger flow. Fold-down seats are in the vestibule.

He discusses seats - a hot topic on new trains. Those on the ‘331s’ are flat-clothed and have more padding than many new trains. This is the result of passenger evaluation carried out at Manchester Piccadilly, where three offerings were made available. Northern took the feedback from all three to complete the interior. Apart from a few minor differences, where boxes and exhausts must be fitted to the ‘195s’, there will be no difference between the DMU and EMU fleets.

Each pair of seats will have a pin socket, while there will be a bike stowage area. Free WiFi is being fitted, as is forward-facing CCTV and a pantograph camera designed to monitor the infrastructure.

Customer Information Screens are being fitted. Hyde says these will display live information supplied by the Darwin system, enabling passengers to access the latest travel details not just for the service they are on, but also elsewhere on the network (should that be required). Electronic reservations will be available, including the controversial plans whereby seats can be reserved as late as ten minutes before departure.

The use of lightweight bogies and aluminium for the bodyshells (the cabs are steel) will reduce energy costs and track access charges. Hyde says that all the trains are 100mph

The cab has been designed following consultation from driver representatives, with the driver centrally located. Controls on the ‘195s’ and ‘331s’ are identical, apart from the power supply. Hyde says feedback from the first drivers visiting the trains is that they are “delighted”.

He says of the 98 CAF trains: “If we are to attract people out of cars we need to get rid of the Pacers.”

Hyde says the plan is for the first trains to enter traffic this December, starting with the DMUs. They will be used on the busiest routes, with the North West and the new Northern Connect route from Chester to Leeds via the Calder Valley identified. More are being discussed.

Northern will maintain the trains, with the EMUs based at Allerton (Liverpool) and the DMUs at Newton Heath (Manchester). The Merseyside depot will be home to the operator’s entire EMU fleet plus the Class 769 Flex fleet. The operator is buying technical support from CAF.

Hyde confirms that there is still work to do on infrastructure on Northern’s patch - and not just between Preston and Manchester via Bolton, where Network Rail cannot yet guarantee that electric trains can run in December 2018. Electrics were due to start running around the turn of the year, but problems with the project mean that while DMUs can use that line, the long-heralded electrics cannot. Hyde says that some areas need to be remeasured for clearances, because the infrastructure will have moved and so clearances may have reduced.

Northern’s Customer and People Experience Director Richard Allan acknowledges that the trains have a higher lease charge, as is expected for new kit, but says: “We have gone from renting a one-bed flat to a three-bed semi-detached. The quality is better, and you pay for that.”

He explains that Northern’s plan is for the new trains to generate more growth: “Northern has gone from 60 million passengers to 100 million in ten years. There is suppressed demand.

“When the Class 319 electrics were brought in between Liverpool and Manchester , there was a 12% growth in six months. These new trains mean capacity will be created into cities like Manchester.”

Clauses are in place that will enable the trains to be extended, or for more complete trains to be purchased. A RAIL source suggests it’s likely that if more vehicles were to be ordered, these would be complete trains rather than unit extensions. However, power supply remains an issue to be resolved. Discussions have taken place regarding a bi-mode version, while hydrogen power is being explored.

In terms of performance, the ‘195’ and ‘331’ can couple with each other. But because they are fitted with Dellners, unlike other fleets, if they require rescuing the older trains collecting them would have to use a special bar. Not all new trains will carry this bar - Hyde says that past experiences have found unreliability in the components through lack of use.

CAF Technical Project Manager Ramon Casale explains: “The UK fleets will be different because of the shape and gauge. The UK has a very typical shape, and the bogie configuration - we are used to articulation whereas the UK has two bogies per vehicle. But basically, the rest is the same.”

Out in the factory, CAF Northern Bodyshell Manager Jesus Simon says: “On the bodyshells we are working with 41 welders. The manufacturing pace is one body every two days. We assemble one electric, one diesel, in that order.”

He explains that the steel comes from Switzerland and then passes through the manufacturing stage, starting with the roof and then the underframe section. These two are then moved to the next stage, where they are married to the bodyside. At that point the steel cab, which is fabricated separately using a special jig, is attached. The project is a 24-hour operation using three shifts.

Simon says 15 more staff are to be recruited specifically for the job, and that while there is currently one line in the final assembly area, that is to be extended to two. On the day of RAIL’s visit, six ‘331s’ were in the physical shape of a train, with the cab attached to a driving vehicle of the sixth set.

The trains begin to arrive in December this year, and a year later the operator will wave goodbye to the Pacers. It’s been a long and bumpy journey, but finally the future looks brighter for the North.