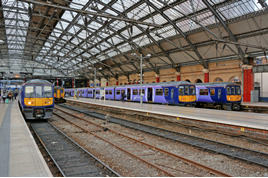 It was back in 1988 when the first Class 319 entered traffic on Thameslink. These four-car, dual-voltage electric multiple units (EMUs) had been ordered by Network SouthEast to serve a project commissioned two years earlier, and were delivered in two batches (1987-88 and 1990).

They transformed travel across London. Today, it’s hard to believe that the Snow Hill Tunnels they ran through had been closed, yet this deal was the start of what turned into the Thameslink 2000 project. Next year, 30 years after the tunnels were re-opened, there will be 24 trains per hour running through them.

Fast forward from 1988, and the trains are only now finally being replaced. This was supposed to have happened more than half a decade ago - they were earmarked for a move to the North West as electrification spread, as well as to parts of the former Western Region.

Of course, that has not gone to plan. There are currently 32 Class 319s with Northern, and at the present time, there are no formal plans for any to move to Great Western Railway.

But what the delays to various schemes have done, in particular the changes in Government policy surrounding train cascades, is to highlight areas of oversupply and undersupply in the train fleet. Fleets of EMUs dating from the 1980s are seemingly without a future. Questions surrounded the Class 319s’ new homes, especially with more new trains being ordered.

Then the Anglian deal was announced in August 2016 (RAIL 807). This included a fleet replacement. Suddenly, as well as the ‘319s’ displaced from Govia Thameslink Railway, the EMU market was to be flooded with Anglian Class 317s and Class 321s. Short-term leases were planned and some cascades that will cover a few years have been signed, but by and large 232 four-car EMUs dating from the 1980s are soon to become homeless. The EMU market is crowded.

And yet the diesel multiple unit (DMU) market has, over the past few years, been written off as a poor investment proposition.

Porterbrook introduced what currently remains the last round of DMUs in the UK mainland, the London Midland Class 172s. But that was back in 2011/12, and it was reckoned that these would be the last DMUs required - wires were being erected, and the market was for EMUs.

But as we head into 2017, things have changed. Northern has bought a fleet of DMUs from Construcciones y Auxiliar de Ferrocarriles (CAF), but there remains a chronic need for more of the type.

Plans for 200 diesel trains had been scrapped by the Government in 2009, when it was announced that the Great Western Main Line would be electrified. Thus the market is short, especially with delays in electrification. Indeed, in December 2016 ScotRail announced it needs more diesel trains, while three operators are using locomotive-hauled trains on routes where DMUs are active - there are just not enough DMUs for this increasingly crowded railway.

Enter Porterbrook and its Flex train, the brainchild of Helen Simpson. For the past two years, the Engineering and Supplier Development Manager at the rolling stock leasing company has been developing a solution for the market. Using displaced Class 319s as the starting point, she has examined what the rail market needs and what technology is available

At the time her work started, trials were being planned (and were subsequently undertaken) with an Independently Powered Electric Multiple Unit (IPEMU). This trial, conducted on the Harwich branch in early 2015, involved converting a Class 379 Electrostar to operate using batteries as well as overhead line electrification (RAIL 769).