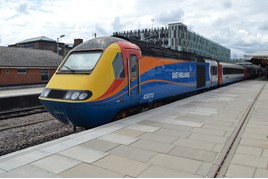 “I do not know what stories the Labour party has been listening to. The Midland Main Line will have brand new, bi-mode trains delivered in the early 2020s, which is years ahead of what would otherwise have been the case under the original scheme.”

That was Secretary of State for Transport Chris Grayling’s response to Clive Betts (Labour, Sheffield South East), during a parliamentary debate on March 1. They were discussing the impending forced withdrawal of High Speed Trains from the Midland Main Line by December 31 2019.

The HSTs must be withdrawn as they do not meet disability regulations that must be in place by the end of next year. However, the replacement bi-mode trains are not due until 2022, which leaves a hiatus during which time the loss of eight eight-car and three six-car HSTs must be covered by the East Midlands franchise. There are currently no plans for this.

Betts had asked if there was a plan for the HST power cars currently used by East Midlands Trains on the MML to be modified, to haul Mk 4 coaches made redundant by the introduction of Class 800/801 Azumas on the East Coast Main Line from November this year. Class 91/Mk 4 sets will be withdrawn from next year.