Over 1,000 non-compliant carriages still in use 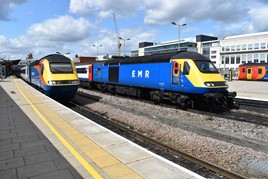 Only 20% of the 1,509 non-accessible vehicles given dispensation by Government to continue in traffic this year have been withdrawn.

Originally, any passenger vehicle that wasn’t fully accessible had to be withdrawn by December 31 2019, in line with the Persons with Reduced Mobility - Technical Specifications for Interoperability (PRM-TSI) regulations that came into force at the start of 2020.

However, delays to new trains, as well as the cancellation of electrification projects on some routes, meant 11 operators received Government dispensation to keep vehicles in service (RAIL 896).

So far, only 304 vehicles have been withdrawn, although others have been refurbished since the start of the year and now meet accessibility standards (Northern’s Class 15x diesel multiple units and ‘323’ electric multiple units).

At the start of 2020, Greater Anglia had the largest non-compliant fleet, with just over half of its vehicles receiving dispensation. Since then, all of its 119 Mk 3s have been withdrawn, while 18 Class 317s are being refurbished to meet the required standards.

Taking into account refurbishment projects for GA, Northern and Transport for Wales fleets, that leaves 1,054 vehicles that do not meet accessibility standards, of which GA has 552.

After that, GA has an October 1 deadline for 28 Class 317s (112 vehicles) and December 1 for 71 Class 321s (284 vehicles). These EMUs are being replaced by Bombardier Class 720s, for which GA received approval to use in passenger service as five-car trains in mid-June (see separate story).