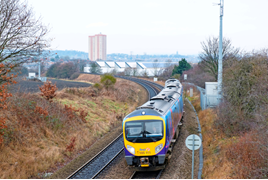 It’s an ill wind that blows nobody any good. The demise of the ill-fated guided bus scheme in Leeds has released £173 million worth of Department for Transport money for new projects in the city region. But it needs to be spent swiftly - by the end of this Parliament - or it could disappear.

Suddenly, after consulting residents and businesses, Leeds Council has come up with a scheme. It proposes building three new rail stations in key growth areas on the city’s edges. If not the stuff of dreams - increasingly any Light Rail Transit system seems to be a mirage dipping over the horizon - there appears to be a solid practicality about the plan.

The headline-grabber is a direct link to Leeds Bradford Airport - a parkway on the Leeds-Harrogate line that would also serve commuters. Out on a limb to the northwest of Leeds and ill-served by roads, the airport has woeful public transport links - for example, just one hourly bus from nearby Harrogate.

On the city’s southwest edge stand White Rose retail park. Sitting near the Huddersfield line, it also has the sense of being disconnected. But it is set to grow, with more shops and a business park on the way.

Meanwhile the eastern edge of Leeds is filling up with new housing and businesses. There has long been a pressing need for a new station, on the Selby/York line, to supplement Cross Gates and Garforth. The proposed site, Thorpe Park, has been earmarked for some time.

This is, in fact, a joint enterprise involving Leeds City Council and regional body the West Yorkshire Combined Authority (WYCA). Yet students of Leeds’ unhappy history of planning public transport may be surprised to see these three projects now on the agenda. It’s not that there isn’t a plausible case for each, but rather that two of them - White Rose and airport parkway - were given short shrift by a WYCA-commissioned study two years ago.

In fact, every option for an extra station on the Leeds-Harrogate line was dismissed by the consultant, Atkins. There was no consideration of any airport link despite Judith Blake, leader of Leeds City Council, recently claiming that this “has long been an ambition for the city”. And White Rose was considered unsuitable “due to the changes which would be needed to the track and signalling equipment”.

The Atkins report added: “The site is located on a curve with a high line speed and a high degree of cant (slant). Constructing a station at this location would be costly.

“It’s also relatively close to Leeds city centre, which means that the impact of stopping services would be detrimental to journey times. Line capacity is already constrained. Morley and Cottingley stations are both less than 1.5km either side of White Rose.”

So what’s changed - other than Leeds now needing not only to spend money in a hurry, but also to be seen acting decisively?

“We understand the constraints, but we’ve identified those. It’s a complex piece of railway line. There’ll be issues to work through, such as the optimum site for a station.”

The case for an airport link, amid decades of inactivity, has long been overwhelming, although quite where this will be remains uncertain.

“Technical difficulties and the topography make a fixed rail-based link extremely challenging,” Hall warns. “There will need to be more studies.”  No site has yet been determined - a new station could be 1km to 1.5km from the airport terminal, he adds.