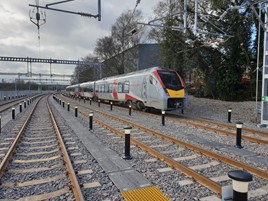 New sidings have been opened at Norwich Victoria in the biggest infrastructure project carried out for Greater Anglia so far. They will be used to stable GA trains, and can hold up to four 12-carriage trains. The first train to use the facility was four-car 755416 on March 3.

The project took just over nine months and involved old sidings being re-moved, re-levelling the site and installation of new track. Three new sets of points were installed, while an existing set of points connecting to the main line underwent heavy maintenance having not been used for 15 years.

Overhead line electrification was installed over Christmas, while signalling work was needed, including upgrading a main line signal. A new shunter’s cab-in has been built, as well as driver walkways and CCTV. Three parking spaces and an accommodation building with an office for security staff.