No date set for electric trains to reach Cardiff Central 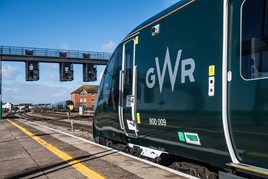 Electric trains are unlikely to be serving Cardiff Central by the end of Control Period 5 (March 31 2019).

Originally, they had been planned to serve the Welsh capital in 2017, but that has been delayed as a result of the Great Western Electrification Programme (GWEP) running over budget. So far, electric trains cannot run further west than Didcot Parkway, although that is expected to extend to Swindon this summer.

Network Rail spokesman Jack Harvey told RAIL on July 9: “We had previously hoped to complete the project by the end of 2018. Until we agree access with TOCs , I’m afraid we can’t be any more specific as to when in 2019 it will be complete.”

A Great Western Railway source told RAIL that no discussions have taken place.

The Office of Rail and Road’s Network Rail Monitor report, published on July 3, said the regulator had “raised concerns with Network Rail in February 2018 having benchmarked previous electrification performance”.

Under original GWEP plans, the overhead wires were due to serve Swansea. Secretary of State for Transport Chris Grayling cancelled that in July last year (along with the Midland Main Line and Oxenholme-Windermere wiring schemes), citing the use of bi-mode trains as a fundamental reason.

In a debate on Welsh railways in the House of Lords on July 2, Baroness Sugg said: “We will use electrification where it delivers the benefits that passengers need more quickly.”

In the same debate, Lord Berkeley said of the Great Western Railway bi-modes used west of Cardiff: “The only reason we have these trains is that Network Rail has failed to electrify the track. Bi-modal trains are slower, more expensive and more polluting. Surely the answer is to give the Welsh Government total control.”