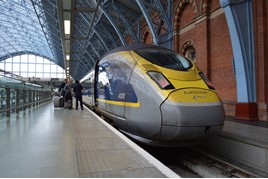 The scheme is designed to allow vehicles to operate across borders more easily, and even though few UK-registered rail vehicles do so, new registrations must display the EVN. The rules came into force on January 1.

Vehicles not destined to run in mainland Europe will not need to display the numbers externally, although they must still be registered under the scheme. The RSSB (Rail Safety and Standards Board) says many UK-registered new vehicles will be able to incorporate the Total Operations Processing System number within the EVN.

RSSB has confirmed that DB Cargo and GB Railfreight Class 92s that travel through the Channel Tunnel will receive the new numbers.