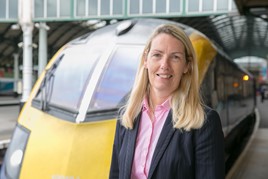 Cheeseman began her career in 2001 as a guard, subsequently becoming general manager of Docklands Light Railway and service delivery director of Manchester Metrolink before joining Hull Trains in a similar capacity. She has been acting as interim managing director since March.