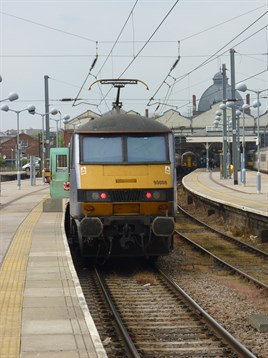 Secretary of State for Transport Patrick McLoughlin has asked Network Rail to continue developing improvements to the speed of the line over the next few years, paid tribute to the taskforce and the Norwich in Ninety campaign, pledging its recommendations would be supported through the next franchising process:

“We know East Anglia’s growing economy needs a better rail service. Part of this government’s long term economic plan is to ensure growth and prosperity for the region and for the nation as a whole.

“I am very grateful to the Great Eastern Main Line Taskforce and the Norwich in Ninety campaign for their analysis of what needs to be done to help deliver world-class rail services for East Anglia, including better infrastructure and state-of the-art rolling stock. I am delighted to say we are going to support the key recommendations of the task force report.

“This government is sending a clear signal to prospective bidders for the next franchise that they will need to show how they will build a better rail network for East Anglia and make Norwich in Ninety a reality.”

Chloe Smith, MP for Norwich North and co-chair of GEML Taskforce, said: “I am delighted that the rail campaign I’ve led for years now has succeeded, with the Chancellor agreeing our call for action on the Norwich to London line. This will achieve a massive result for East Anglia, and bring thousands of jobs to the area. On behalf of the thousands of passengers who are part of this campaign, this is the fair deal we need.

Mark Pendlington, Chairman of New Anglia LEP and co-chair of GEMLTaskforce, said: “This is a massive achievement for our rail campaign and yet another vote of confidence for the future of our region. The voices of many thousands of rail passengers and businesses across Norfolk, Suffolk and Essex have been heard, loud and clear.

Our ambitions are clear; to make this one of the best regions in the UK to invest, bring jobs and increase skills. Today’s announcement brings us a major step forward to that goal.

“This is the best result we have ever had for the Great Eastern Main Line and it is all down to the power of effective collaboration with passengers, businesses, local authorities, MPs and education leaders, working together to put a compelling case across. I would like to thank them all for their fantastic efforts throughout the year.”

The Taskforce has called for line speed improvements, and infrastructure improvements that, it has calculated, would cost £476 million (RAIL 762).