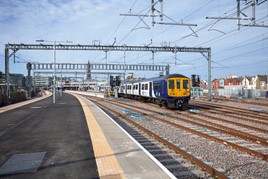 “I am frustrated that what should have been good news for passengers, with the introduction of new services, new routes and expanded capacity, has had such a poor start.”

That was the verdict of Secretary of State for Transport Chris Grayling, writing to MPs on May 29 regarding Northern’s performance in the days after the timetable change - between May 21-29, more than 2,500 trains were either cancelled, part-cancelled or had station stops omitted.

A lack of available crews and trains, coupled with incomplete infrastructure upgrades, meant Northern’s planned new timetable from May 20 was left in tatters.

A RAIL source highlighted how there were 170 timetable clashes at Leeds on May 21, saying: “It’s never happened before in my 30 years on the job.”

A Network Rail spokesman said: “Late timetables have certainly not helped the recent events, but there are many other factors across the industry involved. We are looking at understanding the root cause so that future changes can be implemented more smoothly.”

An NR source highlighted that while late delivery of the timetable was the company’s fault (it had to be ripped up and started from scratch due to delays to the Bolton electrification scheme, which meant Northern started “on the wrong foot”), industrial relations were also causing problems with issues such as crew shortages and rest day working.

On May 24, Network Rail and Northern announced the commissioning of an independent report and recommendations into the preparations and processes leading up to the implementation of the recent timetable change. It highlighted problems around north Manchester and up to Blackpool.

Martin Frobisher, managing director for Network Rail’s London North Western Route, said: “We recognise how tough it has been for customers, particularly since the May timetable change last weekend, and we’re sorry for that. We are working hard with Northern to get service back to where it needs to be. We will work as one team to achieve this.

“The independent report will ensure lessons are learned and that there are no repeats of current problems as we prepare for the next major timetable change in December this year.”

Northern Managing Director David Brown said: “We are doing everything we can to minimise cancellations and delays, and keep our customers informed. It has been difficult for many of our customers and I am truly sorry for this.

“There is urgent work to do to fully understand what did and didn’t work on all aspects of planning and delivery of the new timetable.

“We are committed to working with Network Rail and Northern stakeholders to deliver the services our customers expect and deserve.”