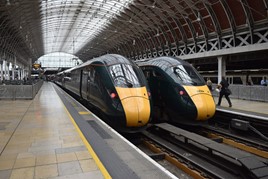 Additional and faster trains are set to run on the Great Western Railway network from the December 15 timetable change, with improvements planned across the region.

Three more trains will run between Bristol Temple Meads and London Paddington in the morning and evening peaks, increasing the frequency from two per hour to three. These trains will call at fewer stations, promising shorter journey times.

Two extra trains will run in the morning and evening peaks from South Wales to London Paddington via Bristol Parkway, and from May next year GWR plans to extend these trains to run throughout the day.

In South Wales, the twice-hourly Cardiff-London trains will have 14 minutes cut off their journey times, reducing them to 1hr 53mins. Further improvements are expected when electrification to Cardiff is completed.

GWR Managing Director Mark Hopwood said: “We have been working hard behind the scenes to prepare to implement the biggest timetable change on this network since 1976, enabling us to take advantage of the full benefits that new Intercity Express Trains are bringing.

“In providing more frequent and quicker journeys, our new timetable will, for the vast majority of users, quite literally mean ‘all change please’. We are pleased the new timetable has now been published.”

Network Rail Route Managing Director Mike Gallop added: “The timetable change this December will be the biggest since 1976, and will mean faster journeys and more frequent services for passengers.

“It follows unprecedented investment in railway infrastructure, including electrification, improved signalling, upgraded stations, and much more which together with the introduction of new trains will transform rail travel.”