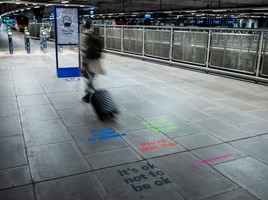 Govia Thameslink Railway has appointed Laura Campbell as Suicide Prevention Manager, the first such role at any train operating company.

The operator has also unveiled motivational messages at Blackfriars, Brighton, East Croydon and St Albans stations, designed to show support and understanding for those with mental health conditions.

Launched today (annual World Suicide Prevention Day), the messages include: ‘It’s OK not to be OK, ‘We’re with You’ and ‘Don’t suffer in silence’. They have been applied at stations where GTR works with partners Samaritans, Network Rail and the British Transport Police to provide support.

In the past 12 months there have been 426 GTR interventions and 35 fatalities, with a 57% increase in life-saving interventions since 2019 across the GTR network. As part of its long-term strategy, GTR aims to reduce the number of incidents by 50% leading up to 2021.

“Growing up I experienced first-hand the trauma that suicide can leave behind and it’s why I took on the role of Suicide Prevention Manager at GTR,” said Campbell.

“It is important to raise awareness of the support that is available to those that may need it and to educate the wider community about the complexities inherent in mental health as well as suicide.”

The messages displayed at Blackfriars, St Albans, East Croydon and Brighton will be mirrored across the entire GTR network’s customer information systems, both on trains and in stations.