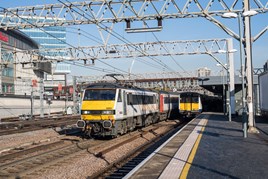 The RMT union has issued Greater Anglia with a deadline of June 19 to confirm that ticket offices and jobs will be kept open for the length of the current franchise, or the union will declare a formal dispute over the issue.

RMT said in a statement on May 31: “Earlier this month, the company informed the union that across the GA network they currently have 64 ticket offices with an establishment of 358 ticket office staff. The company, which currently holds the franchise until 2026, told RMT officials that it is their intention to only have seven remaining traditional ticket offices. These will be located at London Liverpool Street, Colchester, Norwich, Cambridge, Chelmsford, Ipswich and Stansted Airport.”

It claims GA is proposing to close the bulk of the remainder of its station-based services during the next year in three stages, with seven ticket offices to close by this summer.
RMT General Secretary Mick Cash said: “The union is appalled at this planned attack on ticket offices and station staff across the Greater Anglia franchise, which would wipe out the vast bulk of these vital passenger services over the next year. The union will fight with every tool at our disposal to halt these disastrous plans, which are all about cutting public services to pump up private profits.”

GA says it will continue to monitor ticket sales at other ticket offices, and that there would be no job losses as a result of the current proposals to close seven ticket offices.