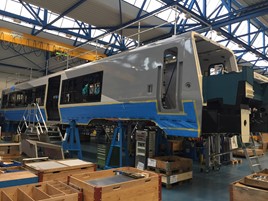 Construction of a brand new Greater Anglia train maintenance depot at Brantham, Essex, planned to open later this year, may not go ahead.

GA managing director Jamie Burles says the Abellio franchise is reviewing the situation due to “a number of issues” and is looking at other options. A final decision will be made within the next couple of months.

In a GA stakeholder newsletter published on March 9, Burles writes that one of the key obstacles to the scheme announced in December 2017 is not being able to agree terms with the landowner.

In addition, he states: “Safety issues relating to the impact of the likely volume of extra train movements over Manningtree level crossing and a number of additional challenges linked to the preparation of the site and the construction process, mean we are reviewing the scheme and looking at alternative options.

“We expect to make a decision on our approach going forward within the next couple of months, to ensure that – whatever our final plan – there is no adverse effect on the introduction of the new trains.”

Sources have suggested that the facility, which was launched in February last year and due to open this December, will no longer be built and that GA is looking for a new depot. It was to home new Stadler and Bombardier trains, although the main maintenance facilities for both would remain Norwich Crown Point and Ilford.