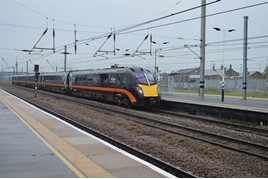 Grand Central submitted its application to the Office of Rail and Road on May 15 to operate additional services on the East Coast Main Line.

The open access operator wants to run one additional Sunderland-King’s Cross train, an additional train between Bradford Interchange and London in the late afternoon, an early morning train from Wakefield Kirkgate to London that will arrive in the capital before 0730, and a ten-coach late-evening train departing London before 2200 that will split at Doncaster (with one part returning to Wakefield and the other continuing to York).

The additional trains will provide an extra 1,600 seats daily to and from London, with six return London-North East trains running, while West Yorkshire will have six trains running to London and five returning.