FROM THE ARCHIVES: How the HSTs are being transformed for Scottish services

Was this article useful?
10 people found this useful 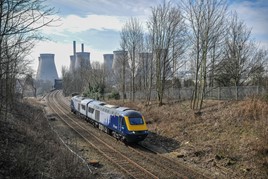 One of the critical elements of the Abellio ScotRail franchise is the commitment to improve the passenger experience between the country’s seven cities.

Currently, long-distance passengers are expected to travel between the Central Belt and the likes of Aberdeen, Dundee and Inverness in trains that can sometimes be only two coaches long.


Back in 2014, Transport Scotland was discussing how to change that. The Scottish Government’s transport division was eager for quality to feature highly in any franchise bid. New-build was an option, but so too was a radical rebuild of what is considered by many to be Britain’s best ever passenger train - the HST.

When Abellio won the deal in 2015, it confirmed that HSTs were part of the plan. They would be released from Great Western Railway by the introduction of Intercity Express Programme (IEP) trains once those entered service.

Before entering use with ScotRail, the HSTs will undergo an extensive refurbishment, as well as a modification to ensure they meet disability guidelines - enabling them to stay in traffic beyond 2020.

This will all help ScotRail’s planned ‘Revolution in Rail’ in two years’ time. Under this plan, the HSTs will operate more direct trains, while SR’s existing Class 170s will operate trains that call at more stations. This will enable SR to run a lot more services, with journey times improving across the board.

Key to the cascade is the fitting of ‘Vaper Stone’ electric-powered single-leaf doors. A Wilee door control system will be used, and door control panels will be located at two doors in the same vestibule in each coach. Panels will be the same layout as for the ‘170s’. Doors will be interlocked with the power and brake controllers, and there will be a temporary override plunger and permanent isolation switch in the driving cab.

The doors are the same as those being fitted to CrossCountry’s five HSTs and 11 GWR ‘short sets’. ScotRail has worked with the operators regarding Office of Rail and Road approval. Angel Trains has delivered the project, while SR will manage the introduction of the trains into traffic.

First Class will be a 2+1 formation, with SR retaining the leather seats installed by GWR. In Standard Class, the same ‘Grammer’ seats as fitted to SR’s 158701-158725 will be installed. Seats will have fold-down tables and armrests, while the seats will also align with windows. The plan is for a 50/50 split between tables and airline seats where possible. This was specified by TS to maintain the quality aspect of the trains.

Seats will have the same 1,800mm pitch as the SR ‘170s’, which is more than the 1,680mm pitch on the GWR sets. Controlled-emission toilets are also being fitted to the Mk 3s, which will have one accessible toilet per HST and three additional toilets per five-coach set (two in a four-car).

The first unrefurbished set moved to Scotland on September 1 (RAIL 835), and has begun driver training in the northeast of the country.

“The arrival of the first HST in Aberdeen is an exciting milestone in our plan to build the best railway Scotland has ever had,” said ScotRail Alliance Managing Director Alex Hynes of the HST’s arrival on September 14.

“Our refurbished HST will connect Scotland’s seven cities, offering better connections for commuters and business travellers, and an opportunity for tourists to get out and about across this great country. The refurbished high-speed trains will mean more seats, better services and an improved experience for our customers.”

Humza Yousaf, Minister for Transport and the Islands, said: “It is great to see this train arrive in Scotland for driver training - an important step towards delivery. Next year sees the start of a transformed inter-city service - connecting Scotland’s seven cities with high-speed trains.”

Angel Trains Chief Executive Malcolm Brown said: “The fleet will undergo interior and technical improvements prior to entering into passenger service, to ensure that it can meet the requirements of modern inter-city travellers.”

The man charged with introducing the HSTs is New Trains Project Manager - HST Fleet Chris Tait. Speaking to RAIL on September 13, he explained the process: “We have received the first HST - that’s the start of the cascade. Currently there is a rake at Doncaster for refurbishment. The first set came to Edinburgh for checks, and MTU looked at the engine. It’s moved to Aberdeen Clayhills for verification before driver training.”

That started on September 18. The ‘43s’ and coaches used for training are not modified, but Tait says this does not affect the practical handling: “The power cars are virtually the same, but they will have forward-facing CCTV.”

Driver training will continue until May. Tait said the northeast route to Aberdeen will be the first to receive the HSTs for ScotRail - a strategic decision as they already run on the route (operated by Virgin Trains East Coast), coupled with the fact that SR’s Haymarket depot, which will be the future home of the HSTs, is not yet ready.

Tait told RAIL that a second HST is due for driver training at the end of November, with a further four coaches moving to Doncaster. It will start training in January, this time based in the Scottish capital.

This is all part of Phase 1 of the project - Phase 2 is Inverness to Perth, and Phase 3 is still being worked on, but which is when the HSTs arrive in Glasgow.

A third set arrives at Craigentinny at the end of the year, when again four coaches move to Doncaster. This will join the other two sets on the East Coast.

Tait points out that route retention will be needed for drivers, as this lapses after six months. Initial training will therefore need to continue in order for competency to be retained.

The first fully refurbished set arrives in February, and will move to Craigentinny. It will undergo routine planned maintenance before driver training starts, at which point the set now in Scotland will move to Inverness for the start of Phase 2. This is also the stage when on-board staff start training on the HSTs.

Tait says that at the start of the May 2018 timetable, four refurbished HSTs will be available. All will be four-coach sets, and he explains that the plan was always to boost capacity on the East Coast route. They are being aimed at specific trains, although the timings initially will be the same as those for ‘170s’, and this will not change until the full fleet is available. Five-coach sets will also be used on this route.

The new doors being fitted represents a new feature for HSTs, which have had slam-doors since they were introduced in 1976. Tait says that lessons have been learned from Chiltern Railways’ automatic door project in 2011: “Each Mk 3 is different in terms of build profile. There were issues with every vehicle - they all have slight variations.”

The sliding doors being fitted are pre-made before being fitted to the coach. A hole is cut into the Mk 3 body side, and the unit is then welded into place.

What are the major differences between the HST and a ‘170’?

“We sat down and looked at the ‘170’ for cost offering,” says Tait. “On a ‘170’ there are 1/3, 2/3 doors, which exposes passengers to the outdoors at stations. The toilets are inside the saloon, which means they open onto passengers eating or reading, whereas on an HST they are outside the saloon. There are no underfloor engines, and there is no requirement to walk through the HST for First Class like there is on a ‘170’.”

Tait adds that other routes will also benefit from an internal cascade of ‘170s’: “At one stage, we were keeping 21 of them. Then it was 34, and now it looks like closer to 40.” This means SR can run its trains using newer diesel multiple units and remove older trains such as the ‘156s’.

Longer-term, Tait says that SR could extend the four-coach sets to five-coach, and that timetable changes are possible. Fuel consumption is being investigated during the training runs, and performance evaluation is under way regarding acceleration.

The full HST introduction is May 2019, when all 26 sets will be available. Tait says of the trains: “It’s about building and delivering a proper inter-city brand.”

@philatrail @RAIL Does it help if I tell you it was his first car?!

@GordonDudman Hi Gordon. Could you follow me back so I can send you a DM on this please? Many thanks