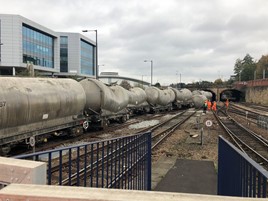 Hauled by 66603, the train derailed at around 0245 as it passed Platform 1. Nobody was hurt in the accident, which resulted in one of the cement tanks landing on its side.

That morning’s peak service was badly disrupted, as five of the station’s eight platforms were blocked.

Network Rail said there had also been significant damage to signalling and points.

“Thankfully, train derailments are very rare, but when they do happen we have to act with utmost caution to protect the safety of everyone using the railway,” said Network Rail North and East Route Director Matt Rice.