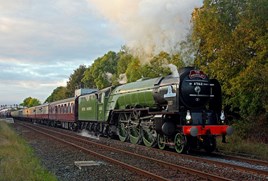 Steam trains formed of Mk 2 carriages will replace DMUs on timetabled trains over the Settle & Carlisle (S&C) route next month.

A1 ‘Pacific’ 60163 Tornado, completed in 2008, will haul the Northern trains over the S&C between Skipton and Appleby on three consecutive days. The first timetabled ordinary main line passenger steam trains to run in England for 50 years are the result of a pioneering modern and heritage industry alliance, formed to help revive the economic fortunes of the beleaguered S&C as well as the towns and villages that it serves. The railway, which was opened in 1875, was severed by a major landslip last February and has been in limbo ever since.

This collaborative alliance comprises Northern, Network Rail, DB Cargo, the A1 Steam Locomotive Trust and Friends of the S&C, together with RAIL and Steam Railway from the Bauer Media magazine portfolio, who came up with the proposal two years ago.

The historic community trains are being promoted under the banner ‘I LOVE S&C’.

RAIL Managing Editor Nigel Harris said: “Former Steam Railway Editor Tony Streeter and I first suggested this to Northern MD Alex Hynes a couple of years ago, but with the old franchise in its last days, it just wasn’t possible to pull it all together. Severance of the S&C gave us the opportunity to finally run a German-style ‘Plandampf’ operation, and it was fantastic to see how everyone at NR, Northern and DB grabbed the idea and ran with it.

“Northern MD Alex Hynes and NR Route Managing Director Rob McIntosh deserve special thanks. They proved how devolved decision making and regional collaboration at ground level really works. We need to see much more of that!”

Traditional DMU paths on February 14-16 will be surrendered to the Peppercorn design Tornado. The 1045 ex-Skipton and 1507 ex-Appleby will be steam-hauled trains supplemented by morning and evening extras, running in reverse order. Tickets bought in advance or from National Rail ticket offices will be permissible for travel. More details to follow.