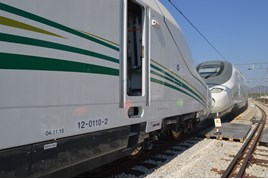 A new UK test track, available to all companies, is being proposed by Spanish manufacturer Talgo as it looks to develop its standing in this country.

Having already confirmed its intention to establish a factory in the UK to build trains here (RAIL 836), the company is now meeting representatives from various regions across the country regarding potential sites.

However, Key Account Manager for the UK and Ireland Jon Veitch, exclusively talking to RAIL, said that there was also interest in a test track. Not only would it be used for the company to test its own trains built here, it could be used by other companies in much the same way new trains built by Hitachi were tested at Old Dalby.

Veitch believes there is a market for another facility, which could be used both for new-build and retractioned trains. He said that various sites have been investigated, including locations in Yorkshire and Scotland.

Meanwhile, the company continues to discuss its UK vision with senior politicians. Having visited North Wales at the end of October, regarding the possible site of its UK facility, Talgo representatives then met with Scottish Transport Minister Humza Yousaf in Edinburgh. Transport Scotland is thought to be keen in attracting the Spanish company north of the border, with several sites in the Central Belt being considered.