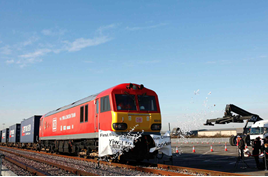 The train was operated by InterRail Group, a multinational transport operator based in Switzerland, on behalf of China Railway subsidiary CRIMT.

The journey was 7,546 miles, with DB responsible for the train from Duisburg (Germany) to Barking, running via the Channel Tunnel and High Speed 1. It started at Yiwu in the eastern Chinese province of Zhejiang, and took 18 days to reach London - twice as fast as a ship.

DB said the train was loaded primarily with textiles and other consumer goods.

For more on this story, see RAIL 819, published on February 1.