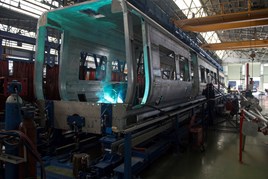 The facility will be built at Celtic Business Park, a 100-acre industrial development on the site of the former Llanwern steelworks. The company plans to create 300 jobs, 200 of which will be in position when the factory opens in autumn 2018.

The site has been chosen because of links to roads, rail and ports, and the availability of local skills. CAF is spending £30 million to get the site up-and-running, and has received grant support from the Welsh Government’s Inward Investment Programme.

Wales’ First Minister Carwyn Jones called the announcement a “major coup for Wales and a big vote of confidence in Wales’ manufacturing industry”.

CAF said it aims to build both trams and trains at the site. The company is targeting contracts with London Underground, Docklands Light Railway and HS2, as well as the Wales and Borders, West Midlands and South Eastern franchises. Previously all the vehicles it has built for the UK have been constructed in Spain.