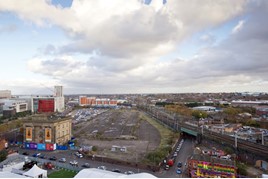 High Speed 2 Ltd says that at the peak of the line’s Phase 1 construction work, 30,000 people will be working on or supported by the project in 2021-22, with more than 25,000 employed in construction alone.

The figure was revealed in its Skills, Education and Employment strategy, published on September 13.

The report also says there will be a second peak of just over 25,000 jobs in the early 2030s (currently estimated to be 2031-32), before Phase 2 winds down for completion. The strategy says a third of jobs supported in Phases 1 and 2a will require at least degree-level or equivalent qualifications.

HS2 Ltd says it is vital that with an uneven year-on-year profile for labour and skills requirements, it is vital to consider the project in the context of other infrastructure projects, with skilled workers moving between them.

Improving skills and education is a key objective of the strategy, with HS2 aiming to:

It also says there are wider opportunities for the new railway to stimulate economic growth in the areas it serves, in co-operation with local stakeholders. It cites the example of masterplans for Curzon Street station in Birmingham and Solihull to create up to 52,000 additional jobs and £1.25 billion in Gross Value Added every year, plus 40,000 new jobs around Crewe.

“Our skills strategy shows how we will create a sustainable pipeline of jobs and skills for companies across the whole country, which boost regional economies and help Britain compete internationally,” said HS2 Chief Executive Mark Thurston at the launch of the strategy.

The UK’s first training centre for the installation and maintenance of slab track, to be used on HS2, was opened at the City of Wolverhampton’s Bilston complex

HS2 Ltd is exploring the use of alternative fuels for its construction vehicles, after trials revealed they are more efficient than the traditional red diesel.