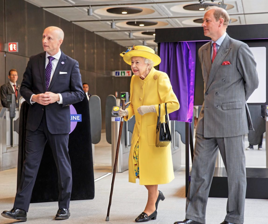 Byford has been in charge of Transport for London for just over two years. He was appointed in June 2020.

He recently secured a funding deal for TfL until 2024. It had previously been surviving on a series of short-term financial arrangements - some only a few days at a time - as revenues fell during the pandemic.

Byford, who was previously the head of the New York Subway, said it was the right time to resume life in the United States. TfL said he was “closing out a 33-year public service career”.

After announcing his resignation, the 57-year-old told the BBC that he still had “five weeks to go” and wanted to ensure the new Bond Street station opened on the Elizabeth line, saying: “You should aim to leave an organisation in a better state than you found it.”.

TSSA General Secretary Manuel Cortes said: “We are sorry to see Andy go. We may not always have seen eye to eye, but his commitment to public service has been great.

“We really hope that Andy’s departure doesn’t signal further cuts to Transport for London. The next commissioner needs to build on his relationship with TfL’s trade unions and the workforce, ensuring good industrial relations are at the heart of running our capital’s transport services.”