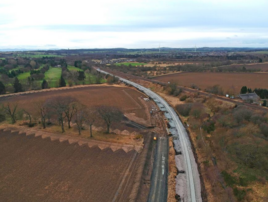 The replacement in early March of switches and crossings at Thornton Junction, at the western end of the route (RAIL 953), gave Network Rail the opportunity to begin laying the first new section of rail on a £116.6 million project that will eventually lead to 19km (12 miles) of double track being installed.

Existing track sections within the first mile of the rail corridor were utilised to deliver new ballast, sleepers and rails to where they would be needed in the section.

The old track was then lifted and the top layers of ballast removed back to the formation level of the trackbed, before it was reformed using the new materials.

Specialist plant machinery then positioned the concrete sleepers in batches of seven, covering 72 metres per hour.

Seven pairs of continuously welded rail sections in 240-metre lengths were positioned on the sleepers, before being clipped into place to form the first mile of what will be the new Levenmouth branch.

The route, which opened in 1854 and closed to passenger services in 1969, has been mothballed since the power station at Methil closed in 2001.

When it reopens in spring 2024, the line will be served by two trains to Edinburgh each hour - one via Dunfermline and the other via Kirkcaldy.