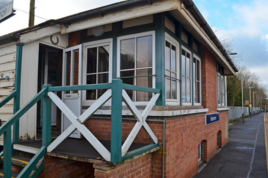 Part of the Portsmouth Main Line closed for nine days from February 12, at the start of a three-year, £95 million project to upgrade outdated signalling.

The work will include replacing three old signal boxes - including an 1895-built, Grade 2-listed box on the platform of Haslemere station, which is still operated using levers.

Passengers faced bus replacement services between Guildford and Petersfield, with shuttle trains between Petersfield and Portsmouth for most of the blockade. The work was timed to coincide with school half-term.

Further closures will follow in October and throughout the project, which is due to finish with new signalling commissioned in autumn 2024.

Ninety signals will be replaced, with signal control moved from Haslemere, Petersfield and Farncombe boxes to Network Rail’s regional operations centre at Basingstoke. Twelve level crossings will also be improved.

The signalling work is being carried out by Alstom, with Osborne holding the civil engineering contract.

NR is also closing the Brighton Main Line from Saturday February 19 to Sunday February 27. The blockade will enable £15m of improvements at the southern end of the route and includes relaying track inside the 1841-built Clayton Tunnel beneath the South Downs, the longest tunnel on the line.

“Brighton Main Line is one of the UK’s busiest routes, and the rail infrastructure is among the oldest and most intensively used,” said NR Sussex Route Director Katie Frost.

“Doing the work in a nine-day closure avoids 20 separate weekend, evening and Bank Holiday closures, which would be even more disruptive to passengers.”