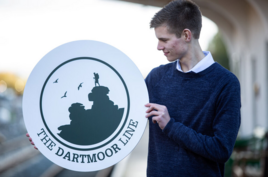 The 16-year-old said he imagined taking part in the Ten Tors Challenge when designing the logo, which now features on station signs, posters, timetables, and a special train livery.

The line has reopened under the Government’s Restoring Your Railway programme (RAIL 945), having been closed to regular passenger services between Okehampton and Exeter since 1972.