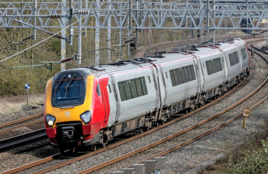 Research carried out by the Rail Safety and Standards Board (RSSB) and funded by the Department for Transport found that air quality on the trains is “poorer than desired” but remains within legal limits.

RSSB studied six routes. It found the highest levels of particles in carriage air were on the journey between London Euston and Birmingham New Street on Class 221 trains.

The highest level of nitrogen dioxide was on a Hitachi Class 800 train between London Paddington and Bristol Temple Meads.

In both cases, the levels were “significantly higher” than levels routinely measured at busy urban roadsides, said RSSB.

The levels on the Great Western Railway bi-mode train were measured when it was operating on diesel power west of Chippenham. RSSB said there was a large difference in measured nitrogen dioxide when comparing diesel with electric mode.

“I don’t think anyone would have predicted the Class 800 would come out with the highest NO2 score,” said James Wright, Air Quality Lead at RSSB.

He told RAIL: “We had no preconceptions, but you would assume a newer train to have better air quality than an older one. We found that was not necessarily the case. We covered a good spread of rolling stock: two bi-modes, a Voyager, an HST and a Turbostar-style diesel multiple unit.”

Read the full story in RAIL 941