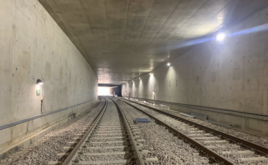 Signalling for the Werrington ‘dive-under’ was commissioned in early September, ready for the new grade-separated junction to come into regular use before the end of the year.

Part of the £1.2 billion East Coast upgrade, the new facility north of Peterborough will enable trains to access the Great Northern/Great Eastern ‘Joint’ route without blocking the East Coast Main Line, thus increasing capacity. As well as increasing timetable resilience, the scheme is designed to allow the addition of two long-distance ECML services per hour.

Described by Rail Minister Chris Heaton-Harris as an “outstanding engineering project”, the scheme has included building of an 11,000-tonne concrete ‘curved box’ on site. It was pushed into place in January.

Around five miles of track has been laid, with the new metals connected to the existing Stamford lines over the summer. The tunnel under the ECML running lines is accessed via two 940-metre-long approach ramps.

Other tasks have included slewing the Stamford lines to the west (completed January 2020), replacement of Cock Lane footbridge, and adding a span to the existing Lincoln Road bridge, plus diverting around a mile of Brook Drain as well as a section of the local Hurn Road. Work started in 2018.

A similar project at Cambridge Junction (Hitchin) was completed in 2013, although in that case a flyover rather than a dive-under was chosen.

Other schemes in the East Coast upgrade include power supply enhancement, remodelling at London King’s Cross, and the building of a new bay platform at Stevenage.

Construction of the Werrington dive-under follows a resignalling and gauge enhancement project undertaken on the ‘Joint’ six years ago, to allow freight to avoid the ECML between Peterborough and Doncaster.

Trains serving Cleethorpes will be cancelled over the weekend of September 25-26 to enable vital footbridge work.