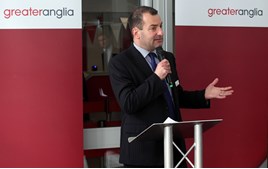 As he helped launch the new nine-year Anglia franchise at London Liverpool Street on October 17, Greater Anglia Managing Director Jamie Burles said there was a huge weight of responsibility to “get it right”.

Abellio won the long-term GA franchise in August. The deal includes £1.4 billion of new trains in a complete fleet replacement (RAIL 807), and the operator must pay £3.7bn in premium payments by the end of the franchise in 2025.

Burles was MD during the last Direct Award in Anglia, and told RAIL: “We literally couldn’t believe that the Department backed us.”

He paid tribute to the work carried out by local campaign groups, including the New Anglia Local Enterprise Partnership, which Abellio supported: “We’ve played a significant role in promoting a long-term strategy. That approach provided a clear approach which has provided much of the planned transformation.”