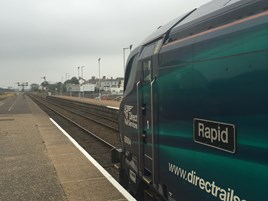 68009 Titan arrived on August 30, and was used on trains the following two days. It worked top and tail with 68016 Fearless, with its first train being the 1640 Norwich-Great Yarmouth.

On September 3, DRS sent 68024 Centaur to AGA. This made its debut on September 5, working with 68016 after 68009 had to return to Wembley on September 3 to go back on-hire to Chiltern Railways (it is one of two that is ‘spare’ for CR operations).

However, Fearless failed on September 5. DRS sent 68004 Rapid on September 6, and it entered traffic the following day, working with 68024. It remained on hire until being replaced by 68022 Resolution on September 19.