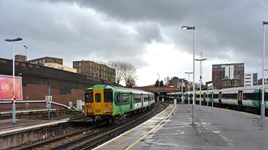 A recently formed rail passenger group is to fund a legal review of the Government’s handling of Southern Railway.

The Association of British Commuters said it planned to hold the Government to account, with a Judicial Review into the action taken by the Department for Transport. The group said it would compile evidence of people losing their jobs because of cancelled trains, and documenting disruption to family life.

ABC spokesman Summer Dean announced a crowdfunding initiative to raise money to engage lawyers. She said the target was £25,000 by the end of September, and claimed to have reached pledges worth £10,000 after just a few days.

The Association of British Commuters has been helped by the Campaign for Better Transport, and operates the #southernfail Twitter feed.

COVER STORY: Northern to be axed... calls grow for TPE to follow

Hopwood: "We are having constructive talks with the DfT as regards a new contract. Another potential outcome is that the current contract will end."

@LeeRender @robbie_burgess @GC_Rail Would love to know more Lee but whoever’s that account is limits access to a chosen few!

@TimKingShrops @RAIL Hi Tim. It was a pleasure to write, and Jeffrey certainly is one of a kind...